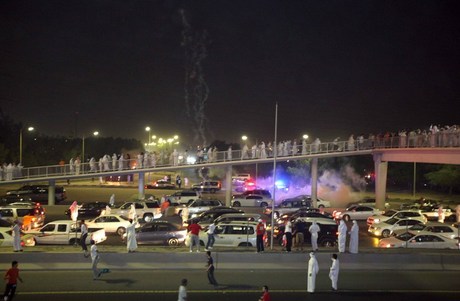 Kuwaiti riot police used stun grenades and smoke bombs against thousands of demonstrators who blocked a major road south of the capital on Sunday as the emir met four leading opposition figures.

After elite special forces and police completely sealed off the original protest site in Kuwait City, organizers told supporters via Twitter to gather instead at Mishref, some 20 kilometers (12 miles) south of the capital.

Although most roads leading to the new location were quickly closed off by police, thousands of people still managed to get through and immediately started marching.

They briefly cut off the sixth ring road, the main motorway in the south of Kuwait before calling off the demonstration barely an hour after it began.

The opposition had called the march to protest against an amendment to an electoral law ordered by the emir last month ahead of a snap December 1 parliamentary election.

"After we have expressed our message of rejecting any play in the constitution, we announce the end of the procession," said the organizers on their Twitter account named "The Dignity of a Nation."

Activists said a number of protesters were rounded up but there were no immediate reports of injuries.

Emir Sheikh Sabah al-Ahmed al-Sabah late on Sunday met four opposition figures including two former Islamist MPs in what appeared to be a mediation effort aimed at ending the stalemate.

Former MP Mohammad Hayef said on Twitter that the emir told them he would accept that the constitutional court rule on the disputed amendment to the electoral constituency law which triggered the current stand-off.

It was the first official meeting between the emir and the opposition since the dispute began several weeks ago.

Earlier, hundreds of members of the elite special forces and police, backed by armored vehicles, deployed at two sites the opposition had set for Sunday's demonstrations and blocked roads leading to them.

The government had vowed to use force if necessary to prevent the march, saying that processions and demonstrations are illegal without a permit.

A government statement late on Saturday said the interior ministry had not given permission for Sunday's demonstration, nor had it received a request from the organizers for one.

The foreign ministers of Jordan and Kuwait on Sunday categorically denied reports that Jordan had dispatched thousands of riot police to the emirate to help quell protests.

Security forces used tear gas to break up two protests by tens of thousands of demonstrators in the past two weeks in which more than 130 protesters and 16 policemen were injured.

Almost all opposition groups have said they will boycott the December 1 poll in protest at what they see as a bid to create a rubber stamp assembly.

The opposition, made up of Islamists, nationalists and liberals, won a February general election but the constitutional court quashed the vote in June and reinstated the previous pro-government parliament which was dissolved last month.

Opposition leaders insist they have no desire to undermine the ruling Al-Sabah family, and on Friday pledged their loyalty to the emir while renewing their demand for the new electoral law to be repealed.