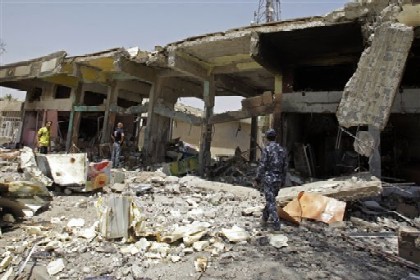 A car bombing near a Shiite mosque in east Baghdad killed three people on Monday, as worshipers continued to mark a key date in the Shiite calendar, officials said.

The blast struck at around noon (0900 GMT) near the al-Obeidi mosque in the east of the capital, killing three people and wounding eight others, according to security and medical officials.

It came as Shiite worshipers mark Ghadir, the day in the Islamic lunar calendar when the Prophet Mohammed is said to have named Imam Ali, his cousin and son-in-law, as his immediate successor, according to Shiite belief.

Though Ghadir fell on Saturday, Shiite Muslims in Iraq have continued to mark it over subsequent days.

Seven other people were also wounded on Monday by a blast in the town of Taji, just north of Baghdad, officials said.

Violence is markedly lower than during the worst of Iraq's communal bloodshed in 2006 and 2007, but attacks remain common, especially in Baghdad.