Over 30 Killed in 24 Hours at Damascus Palestinian Camp 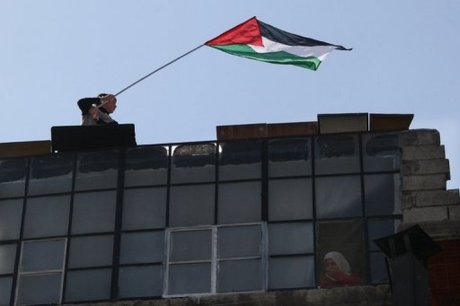 More than 30 people were killed in a 24-hour period in a Palestinian refugee camp south of the Syrian capital Damascus amid fierce clashes between the army and rebels, Palestinian sources said on Monday.

Seven people were killed Monday when a mortar landed on a mini-bus traveling along the western edge of the Yarmouk Palestinian camp, according to Palestinian sources and Syrian state television.

"All night through to Monday, the residents heard deafening sounds of shelling, but this morning there are many people in the streets, the shops are open and traffic is normal," a resident told Agence France Presse on condition of anonymity.

The day before, 24 people were killed when at least 10 shells fell on a southern part of the camp, according to a Facebook page called "Yarmouk Camp News" run by local residents, which listed the names of the victims.

The Syrian Observatory for Human Rights reported five killed, including three children and one woman, in Monday's mortar attack.

The Britain-based Observatory, which relies on a network of activists, lawyers and medics, had reported eight killed on Sunday by mortar fire.

According to the resident, fighting on the outskirts of the camp lasted 24 hours, pitting the rebel Free Syrian Army against government troops, backed by members of the Popular Front for the Liberation of Palestine-General Command (PFLP-GC).

"Dozens were killed or wounded on Sunday during fighting when the so-called Free Syrian Army (FSA) tried to infiltrate the camp... but were pushed back," PFLP-GC spokesman Anwar Raja told AFP.

According to the Observatory, clashes began in the border districts of al-Hajar al-Aswad and moved to the outskirts of Yarmouk, where PFLP-GC fighters joined on the side of the regime and other Palestinian factions fought with the rebels.

Fighting had erupted last Tuesday between rebels and pro-regime Palestinian fighters backed by troops in Yarmouk, the largest Palestinian refugee camp in Syria with some 148,000 residents.

The PFLP-GC is headed by Ahmad Jibril, a staunch ally of President Bashar Assad, who has been fighting an unprecedented revolt against his regime that began as a peaceful uprising in March 2011 and steadily militarized under repression.

In early August, Palestinian President Mahmoud Abbas condemned shelling on the camp, which killed 21 civilians including two children, and chided the PFLP-GC for its role in dragging Palestinians into the bloody conflict.

Considering how successive Syrian Governments have kept the Palestinians in Refugee Camps for over 60 years, I simply can't understand how any of them can possibly support the government side there, unless..............they are getting payments (bribes) from that government.

Considering how many have died on the hand of the Syrians and their supporters one can ask who is the real enemy of the palestinians. Israeli of the Syrians?

I think you answered that yourself.
Civilians killed in Syria since 1973 - Syrian Army 40,000, Israeli Army 0.