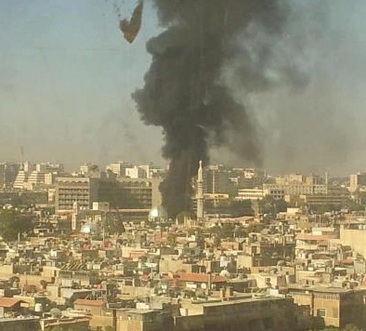 The suicide car bomb attack on a military post in the central province of Hama struck early Monday, killing at least 50 government troops and loyalist militiamen, the Syrian Observatory for Human Rights said.

"The post, located at the Center for Rural Development, is the largest gathering place for troops and pro-regime militiamen in the region," said the Observatory, a Britain-based monitoring group.

Regime aircraft meanwhile continued to pound rebel-held positions around the country, with one air strike killing at least 20 rebel fighters in the town of Harem in the northwestern province of Idlib, the Observatory said.

The rebels have scored significant wins in recent weeks and hold swathes of territory in the country's north, but have come under intense bombardment from the air as President Bashar Assad's regime seeks to reverse rebel gains.

Clashes also broke out Monday around Damascus and in Syria's second city Aleppo, and state television reported a car bomb attack in the capital had left four dead and dozens wounded.

Fighting erupted in southern districts of the capital on the edge of the Yarmouk Palestinian camp, the Observatory said, with Palestinian sources saying 31 people had died from shelling at the camp on Sunday and Monday.

In Aleppo, fighting broke out at a roundabout at the northwestern entrance to the city in Zahraa district and on the airport road to the southeast, the Observatory and residents said.

One resident of a district near Zahraa said Monday's fighting in the area was the heaviest in recent days.

"It's been almost one week that we are living in terror at night. We hear everything -- gun battles, tank shelling, explosions... The clashes before dawn today were the worst all week," Samir, a 37-year-old pharmacist, told Agence France Presse.

The Observatory said at least 105 people, including 55 soldiers and pro-regime fighters, had been killed in the violence on Monday.

The escalating conflict has added urgency to a meeting of the Syrian National Council in Qatar, where the United States is reportedly pressing for a new umbrella organization to unite the country's fractured opposition.

According to the reports, which emerged after U.S. Secretary of State Hillary Clinton said the SNC was not representative, long-time dissident Riad Seif is touted as the potential head of a new government-in-exile dubbed the Syrian National Initiative.

Seif on Sunday denied planning to head such a government, while SNC chief Abdel Basset Sayda denounced what he called "efforts to bypass the SNC".

On Tuesday SNC members will hold a debate on a proposal put forward by Seif to create a new political body to represent the opposition, folding in the SNC and other anti-regime groups.

The SNC lashed out on Friday at alleged U.S. interference with the opposition, accusing Washington of undermining the revolt and "sowing the seeds of division" by seeking its overhaul.

On the diplomatic front, Russian Foreign Minister Sergei Lavrov accused countries that support Syria's rebels of encouraging them to fight rather than pressuring them to negotiate an end to the conflict.

Russia, one of the Syrian regime's most influential foreign allies, held no sway over the rebels, Lavrov said at a news conference in Cairo with his Egyptian counterpart Mohammed Kamel Amr.

Countries that do have influence over the rebels, among them some Gulf Arab states and Western powers such as the United States, should encourage them to "sit at the negotiating table," Lavrov said.

Lavrov met Sunday with Arab League chief Nabil al-Arabi for talks, after which Arabi said "there wasn't any agreement on anything" during the discussions.

The Observatory says more than 36,000 people have died since the uprising against Assad's rule broke out in March 2011, first as a protest movement inspired by the Arab Spring and then as an armed rebellion.

I hope some Hizbcocaine members were there to get blown. Bashar should realize by now increasing airstrikes while losing on the ground is not working.

I second that BIG TIME! Clean that region from the devil's hands!

bigsami and gabby, you both are real shortsighted people with borderline childish view on war/politics and how things are played in general.
while this "devil" and i cannot stress enough on "might" go away in the very far future, his replacement will be the likes of which the devil himself will envy, and then we'll meet again here and i'll remind you of how you cheered for the dog to leave only to have him replaced by a monster, so is the nature of the Arab world, so is the nature of the region, you cannot escape that and never will, until its foundations starting from the way of thought, education, religious ideologies are changed, until then i'll look at the so called arab spring, from hellish present lybia, to downgraded and downright corrupted egypt, and wonder how history repeats itself.

I agree with you Will. Most of the posters here are mediocre cheerleaders.

Those suicide attacks are coming to leb, matter of time only, thnaks to 'law kuntu a3lam' arrogance who is not sparing one moderate suni politician from murder or exile.

Sounds to me like another "public" funeral for HA fighters is on the way, of course as usual no real dignified explanation on how and where they died is gonna happen anyways.

bashar's biggest problem is that demographics is not in his favor. He can only draw so much support from his alawite base (which is starting to show signs of discontentment), his suni base is all but vanished after defections of tlas/hijab, and his opponents are getting more arms and trainning versus time. As the monopoly on weapons of a small minority start to erode the demographic numbers will ultimaltely settle the outcome. Regime is doomed.

if anything, the rebels should really start concentrating on going after airbases or the supply lines to the bases. once this is done, bashar and the rest of his murderers are done.

Apparently this "Syrian Observatory for Human Rights" is one guy sitting in London, referred to in a BBC piece as a member of the opposition. Sounds like your typical Lebanese warlord. "Hello, people of Lebanon, I am from France and Saudi Arabia, and I am here to help you. YOu can trust me."

like a couple of people sitting in Tehran and Damascus saying the Israel is responsible for Al-Hassan's assassination without offering any proof or information for their claims.

Information abuse works in all kinds of mysterious ways--you want to point out one (which if you notice there is a disclaimer in most publications), you should be prepared to be questioned on information that you may rely on from other sources.

Suiciders again. Hard to cheer this when you know who detonated himself was an Al Qaida op. Bas, as long as they are killing each other...mashallah

really? how do you know he is AlQaeda because he is willing to give up his life for a noble cause? That's not alQaida to me that's pure human...

are you next to be sent in by hizbocrap?

Lebanon and the Lebanese people suffered a lot because of Syria and Israel .Karma is catching up to Syria, and Israel will be next..

bashar is a murderer not a surivor

the opposition control the northern and some of the central region...2al the opposition is finished, you wish dude, Long live the Free Syrian Army