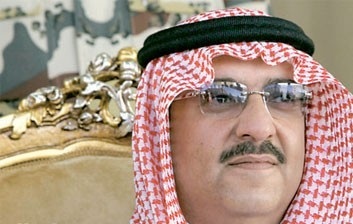 Saudi King Abdullah on Monday appointed as interior minister Prince Mohammed bin Nayef, who has led a crackdown on al-Qaida and survived a suicide bomb attack claimed by the jihadists.

The monarch removed half-brother Prince Ahmed bin Abdul Aziz from the position "upon his request," according to a royal decree published on SPA state news agency, adding that he replaced him with Prince Mohammed.

Prince Mohammed is the son of Prince Nayef, who served as the kingdom's interior minister for 37 years until he died in June, and was replaced by Prince Ahmed, who was his deputy.

The new minister, who had served as assistant minister for security affairs since 1999, has effectively led the kingdom's crackdown on al-Qaida, following a wave of deadly attacks between 2003 and 2006.

He survived a suicide attack in August 2009 when a bomber managed to infiltrate the prince's security and detonated his implanted explosives next to him.

Prince Mohammed suffered only superficial injuries, but apart from the bomber, who was killed, no other serious casualties were reported.

The Yemen-based Al-Qaida in the Arabian Peninsula claimed responsibility for the attack.

It was the first high-profile al-Qaida attack on the government since militants rammed a car bomb into the fortified interior ministry in Riyadh in 2004.

It was also the first strike on a member of the royal family since al-Qaida launched a wave of attacks in the kingdom in 2003, targeting Western establishments and oil facilities and leaving more than 150 Saudis and foreigners dead.