Car Bomb Kills at Least 25 at Iraq Army Base 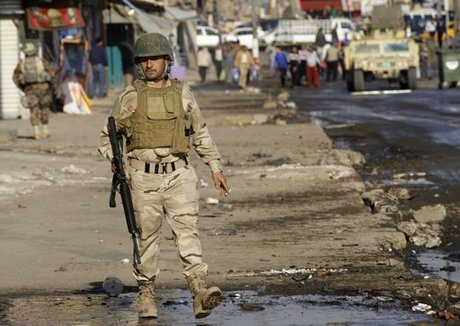 A car bomb exploded Tuesday at the entrance to an Iraqi army base as potential new recruits were massed at the gate, killing at least 25 people, security and medical officials said.

The blast, which also left at least 30 people wounded, is likely to raise fresh concerns over the capabilities of Iraq's security forces 11 months after the departure of American troops.

Tuesday's bombing struck at around midday (09:00 GMT) in the town of Taji, 25 kilometers north of Baghdad.

An interior ministry official put the toll at 26 dead and 30 wounded, while a medic said 25 people had died and 40 were hurt. It was not immediately clear how many of the victims were soldiers or new recruits.

Differing tolls and breakdowns of casualty figures are common in the chaotic aftermath of violence in Iraq.

The blast struck as the base was holding a recruitment day to welcome potential new soldiers, events which have previously been targets of militants intent on carrying out mass-casualty attacks in Iraq.

On January 18, 2011, a suicide bombing in the middle of a crowd of police recruits in Tikrit, north of Baghdad, killed 50 people and wounded 150, and on August 17, 2010, another suicide attacker killed 59 army recruits and wounded 125 others.

Iraq's security forces are seen as capable of largely maintaining internal stability, despite regular deadly attacks nationwide, but are widely acknowledged to be unable to protect the country's borders, airspace or maritime territory.

No group immediately owned up to Tuesday's attack although al-Qaida's front group in Iraq has claimed credit for previous attacks on recruitment centers.

Tuesday's bombing was the deadliest single attack to hit Iraq since July 23, when a series of coordinated blasts also in Taji killed 42 people on what was Iraq's deadliest day in two and a half years.

Violence is sharply lower nationwide since its peak during Iraq's brutal sectarian war in 2006 and 2007, but attacks remain common, especially in and around Baghdad.