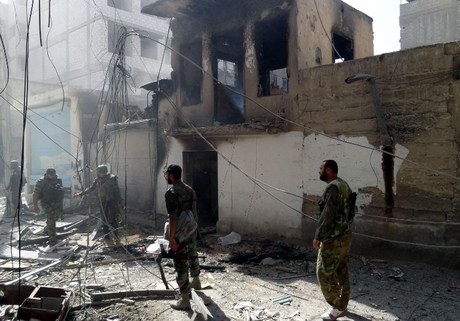 At least 131 people were killed as bombings, clashes and air strikes shook Syria on Tuesday, a rights watchdog said.

In the capital Damascus, gunmen shot and killed the brother of Syria's parliament speaker as he drove to work, the state-run news agency reported.

It was the latest in a wave of assassinations targeting Syrian officials, army officers and other prominent supporters of President Bashar Assad's regime.

Four of the president's top security aides were killed in a rebel bombing of state security headquarters in Damascus on July 18, including the defense minister and Assad's brother-in-law.

In the latest in a wave of bomb attacks, at least 10 civilians were killed and 40 wounded as three blasts hit the west Damascus suburb of Qudsaya on Tuesday, the Syrian Observatory for Human Rights said.

"At least 10 civilians were killed and more than 40 wounded, some in critical condition, when three improvised explosive devices detonated in the working-class district of Waroud in the suburb of Qudsaya," the Britain-based watchdog said.

State news agency SANA also reported casualties from a bombing in the area, without giving an exact toll.

Meanwhile, rebels ambushed a military convoy in Idlib province, their stronghold in the northwest, killing at least 12 troops and wounding 20, the Observatory said.

"At least 12 regime troops were killed and at least 20 wounded by improvised explosive devices, gunfire and mortar rounds that targeted their trucks, bus and armored personnel carriers near the town of Mohambal," the watchdog said.

The ambush triggered heavy fighting around the town, which was hit by three air strikes, the Observatory added.

The clashes came after a rebel car bomb killed 50 pro-regime fighters at a military post in the central province of Hama on Monday.

A bomb exploded before dawn in the city of Mudamiya near the capital, causing injuries and significant damage, the Observatory said.

A second rigged vehicle was detonated Tuesday morning in the southern Damascus suburb of Sayyida Zeinab, causing damage but no casualties according to the Observatory, which relies on a countrywide network of activists and medics.

Also on Tuesday, the regime renewed air strikes across the country, dropping two bombs in the heart of Douma northeast of the capital, and hitting targets in the northern province of Aleppo and the eastern city of Deir Ezzor.

Seven civilians died in air strikes on the central town of Houla, the site of a massacre in which 108 people, the majority women and children, were killed in May.

Warplanes also bombarded the northwestern Idlib town of Maaret al-Numan, seized by rebels nearly a month ago, while fighting broke out around the nearby military base at Wadi Daif and near the town of Jisr al-Shughour.

The embattled regime of Assad has increasingly relied on its air power to try and fight back rebel gains on the ground.

Fighting was also raging in northern commercial hub Aleppo, where two rebels were killed, while another two died in Homs city, the Britain-based Observatory said.

The Observatory says more than 36,000 people have died since the March 2011 outbreak of the Syrian revolt, which began as a peaceful protest movement inspired by the Arab Spring but evolved into an armed rebellion following repression.

The head of the snake needs to be removed.

I always watched the him clap for ASSad when he walked into the Parliament. Yalla....let him clap now.

About time that Hariri, either resigned or start copying the FSA methods so people can start respecting him and not holding him the reason why 14 Azar is weak.