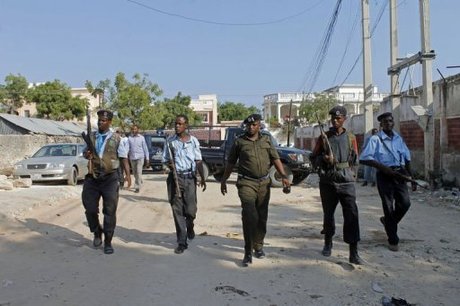 A strong blast rocked Somalia's parliament Wednesday, with at least one person killed, an Agence France Presse reporter at the scene said.

The blast, believed to be a car bomb set off close to the parliament, is the latest in a string of attacks in the war-ravaged Somali capital.

A body of a Somali government security official dressed in military uniform could be seen following the explosion.

No group immediately claimed responsibility for the blast, but the al-Qaida linked Shebab insurgents have conducted a series of guerrilla style attacks in the capital since pulling out of fixed positions there last year.

The insurgents have vowed to topple newly elected President Hassan Sheikh Mohamoud, who took office in September after being chosen by the country's new parliament, bringing an end to eight years of transitional rule.

An offensive led by the 17,00-strong AU force alongside Somali forces has stripped the Shebab of most of the towns they held.

But analysts have warned the group are still a dangerous force, reverting to guerrilla tactics and carrying out targeted attacks.