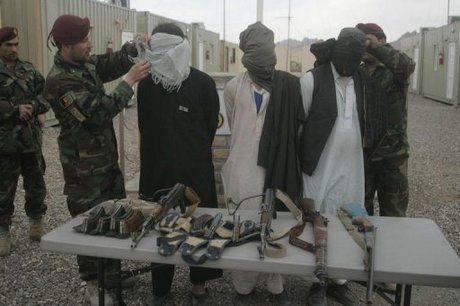 Taliban insurgents told re-elected President Barack Obama Wednesday to admit that the United States has lost the war in Afghanistan and pull its troops out now.

"Obama must by now know that they have lost the war in Afghanistan," spokesman Zabiullah Mujahid said in a statement posted on the Islamists' website.

"So, without further lying and delays, they should leave our sacred land and focus on their own country instead."

Accusing Americans of committing war crimes, he added: "The American administration should stop acting like police in the world and focus on solving their own people's problems, and don't make the world hate Americans even more."

The Taliban, who ruled Afghanistan from 1996 until 2001, were ousted by a U.S.-led invasion for harboring al-Qaida leader Osama bin Laden after the 9/11 attacks.

They have since waged a bloody insurgency against the government of President Hamid Karzai, which is backed by more than 100,000 NATO troops, mostly Americans.

All NATO combat troops are due to withdraw by the end of 2014 and hand responsibility for security to Afghan forces.