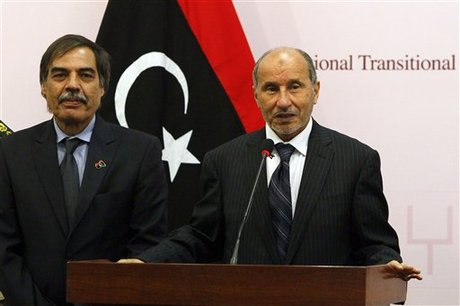 A Libyan military court on Wednesday ordered prosecutors to interrogate former transitional leader Mustafa Abdel Jalil over the murder of a general who had commanded rebel forces last year.

The court in the eastern city of Benghazi ordered that the ex-chairman of the National Transitional Council, a political body representing rebels in the 2011 conflict, be questioned over the killing of General Abdel Fatah Younes.

Younes, the highest-ranking military personality to join the 2011 uprising against Moammar Gadhafi's regime, was killed in July 2011 in murky circumstances after being recalled from the front line for questioning.

Wednesday's hearing was adjourned until February 20, 2013 because the prosecutor general has yet to question some of those suspected of involvement in his death, the court noted.

After the hearing, members of the Al-Obeidi tribe to which the general belonged warned they would take justice into their own hands if Libya's new authorities continue to "neglect" the case.

The tribesmen believe the NTC played a role in the general's assassination.

Abdel Jalil announced Younes' death on July 29, 2011, saying that he had been shot and killed by an armed group as he was brought in to be questioned by a panel of judges over the military situation.

His burned and bullet-ridden body was found on the outskirts of Benghazi.

The assassination fueled widespread rumors and unconfirmed reports on the identities and motives of the perpetrators. Another council member, Ali Tarhuni, blamed members of a shadowy Islamist brigade for the killing.

Thirteen people have been formally accused of involvement in the affair, including Judge Jumaa al-Jazwi who signed the order to arrest Younes. Jazwi was himself assassinated in June this year.

Also among the accused is Ahmed Bukatala, leader of the rebel brigade which was sent to bring Younes back from the front.

Younes played an instrumental role in the February 18-20 liberation of Benghazi, cradle of the revolution, where he brokered a ceasefire at a besieged military base in the center of city, permitting loyalists to flee.

But despite his early defection, many rebels put little faith in the general, who was part of the circle of officers that helped bring Gadhafi to power in a 1969 bloodless coup.

Some blamed him directly for lack of progress in the NATO-backed rebel offensive against Gadhafi's regime. It took eight months of pitched battles across the country before the veteran strongman was finally toppled.

The NTC at the time set up a committee to investigate Younes' death. The case was later referred to a civil court which then passed it on to the military court.

Abdel Jalil, 60, was justice minister until his defection in February 2011. He led the opposition during the war and guided Libya through a turbulent transition that culminated in July with democratic elections.