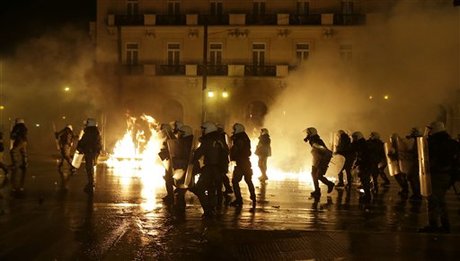 A huge protest outside the Greek parliament turned violent Wednesday ahead of a late-night vote on a deeply unpopular new austerity bill, as demonstrators hurled petrol bombs and police fired tear gas to disperse them.

As a general strike called by the two main labor unions paralyzed the country for a second straight day, more than 70,000 people turned out to protest the new 18.5-billion-euro ($23.6-billion) belt-tightening package.

The measures are vital to unlock international aid and stave off imminent bankruptcy for the crisis-ravaged country.

But when officers used tear gas to repel a group of nearly 300 people, protesters responded by throwing petrol bombs, according to a police source, who said 20 people had been detained.

The violence erupted as 300 lawmakers held a fierce and lengthy pre-vote session that was interrupted when Finance Minister Yannis Stournaras announced that salary cuts would also affect parliamentary employees -- who responded by threatening to go on strike immediately.

Stournaras later recalled the proposal, clearing the way for an expected late-night vote on the bill, which includes harsh cuts to pensions, salaries and welfare benefits.

Main opposition party Syriza and the nationalist Independent Greeks failed in a motion challenging the legitimacy of the vote.

The package, which includes spending cuts and other reforms to be implemented by 2016, is necessary for Greece to unlock a 31.5-billion-euro ($40.2-billion) tranche of aid from its troika of international creditors -- the European Union, International Monetary Fund and European Central Bank.

Without the austerity package, Greece risks running out of money on November 16, posing the biggest challenge to the coalition government led by conservative Prime Minister Antonis Samaras since it took office in June.

Stournaras had on Tuesday implored lawmakers to vote for the package, particularly reluctant members of the governing coalition, and observers expect parliament to approve the law.

"The country needs to implement a package of measures in order to eradicate the threat of bankruptcy for good," Stournaras said. "We are at the final, crucial crossroads and we have to make the right decision, otherwise our progress so far will be forever diminished."

Despite the looming bankruptcy and renewed warnings of a possible euro exit, many Greeks are angry at repeatedly having to tighten their belts.

"It is certain the austerity measures will pass, we have known this for a very long time. It is a very well organized and planned crime against Greece and its civilians," unemployed journalist Rena Maniou told Agence France Presse.

"I now comprehend the stories my grandparents described of the German occupation. Something similar is happening now, the only difference being things are a little worse this time around because they are selling out Greece," she added, reflecting anger among some at European paymaster Germany's tough fiscal demands.

The mass-selling Ta Nea newspaper branded the new austerity cuts "poisonous", but said: "Even if they are painful, they are vital for the country to emerge from recession and kickstart the economy."

Public transport in Athens was out of service for a second day, although the metro was running partial services to ferry protesters into the city center.

Pharmacies were closed and rubbish collectors joined other civil servants including post office and museum workers on the strike, leaving the streets of Athens littered with trash bags.

Dimitris Tsikerdis, 35, an IT contract worker and Syriza voter, said he believed the legislation will pass.

But he said he would be joining Wednesday's protest even if demonstrations "have changed nothing in Greece, not even the results of our elections" in June which brought the Samaras government to power.

The measures under discussion include a rise in the retirement age to 67 from the current 65, and cuts of five to 10 percent in pensions of more than 1,000 euros a month.

Civil servants' 13th and 14th month pay would be scrapped, and further salary cuts imposed on academics, hospital doctors, diplomats and members of the armed forces.

"These measures essentially bring us many years back. All the labor rights the Greek people won post-World War II and post-dictatorship are taken back," union activist Marie Lavrentiadou said.

"The measures will be voted in, but the measures are not voted in the conscience of the Greek people and they can be ousted," she said.

The government however has warned that Greece has no choice but to adopt the measures if Greece wants to stay solvent and in the eurozone.

Eurozone creditors are due to make a decision on the release of the funds -- part of a massive rescue package for Greece -- at meeting of finance ministers on Monday.

One glimmer of hope emerged Wednesday, when the European Commission forecast that Greece would come out of recession in 2014 with growth of 0.6 percent after having shrunk by about a fifth since the economic crisis broke.

However, in the 2013 budget unveiled last week, the finance minister predicted the economy would shrink by a worse than expected 4.5 percent next year while the debt mountain would swell to 346 billion euros or 189 percent of economic output.