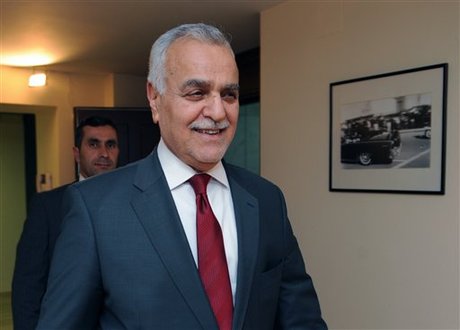 Two guards of vice president Tareq al-Hashemi were Thursday sentenced by an Iraqi court to death for planting a roadside bomb, at a hearing boycotted by defense lawyers who said it was unfair.

Hashemi, a top Sunni official and a prominent critic of Shiite Prime Minister Nouri al-Maliki, has himself being handed four death sentences in absentia. He dismisses the charges against he and his staff as politically-motivated.

Thursday's rulings follow death sentences for six other bodyguards at a hearing on Tuesday. Defense lawyers stayed away from both trials to protest what they alleged were pre-arranged verdicts.

"The court issued death sentences for two bodyguards of Tareq al-Hashemi because they were accused of being responsible for a bomb explosion at Mustansariyah intersection" in east Baghdad, said Muayad al-Izzi, who heads Hashemi's defense team.

"Defense lawyers boycotted the case, because it seems the rulings of the court have already been decided," he added.

Izzi said his team were considering boycotting further hearings on charges against Hashemi scheduled for December 2 and December 5, but had not yet made a final decision on whether or not to do so.

Judicial spokesman Abdelsattar Bayraqdar did not respond to requests for comment.