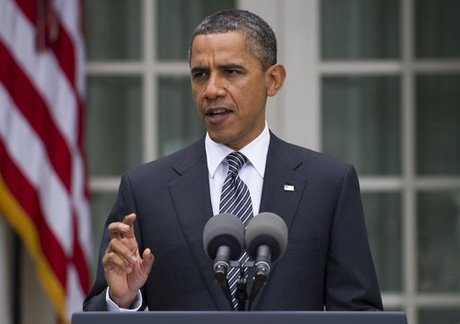 U.S. President Barack Obama on Friday claimed a mandate to raise taxes on the rich to pay for deficit reductions, firing his first post-election shot in a year-end budget showdown with Republicans.

"We can't just cut our way to prosperity. If we are serious about reducing the deficit, we have to combine spending cuts with revenue, and that means asking the wealthiest Americans to pay a little more in taxes," he said.

The president also announced in a punchy, televised White House statement, his first public appearance since his election night address, that he would call top Republican and Democratic leaders to the White House next week.

The talks will focus on averting the so-called "fiscal cliff" -- a catastrophic blend of automatic tax rises and harsh spending cuts due to come into force on January 1, which could cause a new recession.

Obama signaled a willingness to compromise on the details of a deficit reduction plan, but he made clear that his bottom line principle involved rejecting the Republicans' flat refusal to raise any taxes.

"This was a central question during the election, it was debated over and over again. On Tuesday night, we found that the majority of Americans agree with my approach."

"I want to be clear. I'm not wedded to every detail of my plan. I'm open to compromise. I'm open to new ideas. I refuse to accept any approach that isn't balanced.

"I'm not going to ask students and seniors and middle class families to pay down the entire deficit while people like me making over $250,000 aren't asked to pay a dime more in taxes. I'm not going to do that."

Obama's approach left room for negotiation with Republicans and could possibly permit a compromise that keeps income tax rates the same for the rich, but involves a removal of deductions on investment income.