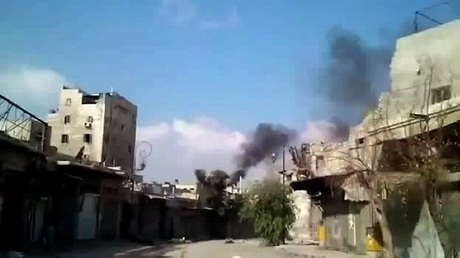 Syrian army tanks shelled a refugee camp and two nearby districts in southern Damascus on Wednesday as battles raged and warplanes bombarded a rebel-held northwestern town, a watchdog said.

The tanks were deployed at the Palestinian camp of Yarmuk overnight, as well as the nearby districts of Tadamun and Assali, said the Syrian Observatory for Human Rights.

Both Yarmuk and Tadamun were scene of battles between the army and rebels late on Tuesday, said the Britain-based Observatory.

On Wednesday morning, shells were fired into a second refugee camp east of Yarmuk, said the monitoring group, though it did not specify if they had been fired by the army or by rebels.

Fighting in Damascus has intensified in recent weeks, after the army put down a mid-summer rebel assault on districts particularly in the southern belt where anti-regime sentiment is strong.

The violence is linked to major, ongoing battles in several parts of Damascus province, chiefly in the area known as Eastern Ghuta east of the capital.

Elsewhere, fighter jets bombarded a rebel-held town in the northwestern province of Idlib, the watchdog said.

"The air force has carried out two air strikes on the town of Maaret al-Numan," said the Observatory.

Rebels seized Maaret al-Numan on October 9, and the army has since waged an unrelenting but unsuccessful offensive to take back the town strategically located on the highway linking Damascus and second city Aleppo.

The Observatory -- which relies activists, doctors and lawyers for its information -- says more than 37,000 people have been killed in Syria since the anti-regime revolt broke out in March 2011.

Damascus was "liberated " and purged or not?

It will not be liberated, it will be razed. They can always move and take over Lebanon. It is an easy prey.