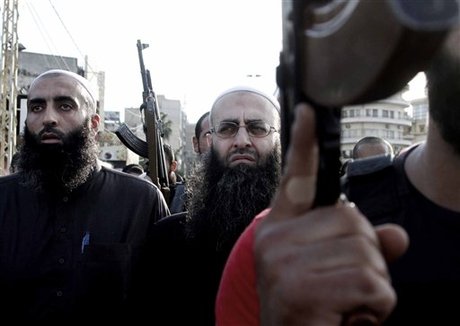 The warrant was issued on charges linked to an attempt to seize the weapons of security forces.

Saqr also issued an order to determine who was involved with Asir during Sunday's incident that witnessed a clash between him and an Internal Security Forces checkpoint in the southern city of Sidon.

The dispute broke out when the security members stopped a car with tinted windows that turned out to be driven by Omar al-Asir.

It was determined that he was not carrying a car license or another to drive a vehicle with tinted windows.

Asir promptly called for the assistance of gunmen who arrived at the scene and attempted to release him from the security forces' custody by force.

They then left the scene with Omar al-Asir and headed towards his father's Bilal bin Rabbah Mosque.

A clash had broken out later on Sunday between Sheikh Ahmed al-Asir and Hizbullah supporters.

Two of Asir's companions and an Egyptian national died in the clash that was a product of sectarian tensions in Sidon.

When Hizbullah members and co. do the exact same thing (call up their cousins with guns to come save them), no one says shit, but when this clown does it, its terrorism? You guys are two faces of the same disgusting filth-ridden coin.

As long as the warrant against the accused of Harb assassination is also served. Break the Law and you should comply with the court warrants. Ignore the warrant then you should go to jail. Liberty and justice for all.

yeah, i agree. no to double standards.

so he has a car no papers to prove it's his car and no licence for dark tinted windows then he brings gunmen and threaten the police and runs away and after all this judge saker issues a simple search warrant????? what is this WEAK Justice? if he was a normal citizen not following any salafist leader he would have been arrested and the army secret services would have tortured him and beat him untill he bleeds. But because he is the son of this NEW civil war LORD who is trying hard to burn the country he gets seached and that's all.
This is a shame. and the most shameful is that these people are still running the streets and pretending that they are God's prophets while they are worse than Satan himself.

what about the M8 iranian thug terrorists?!? the people who killed hariri, wesam 3eed, wesam 7assan?!? where are they??! the only language you understand is terror and murder and inchala we will make you have a taste of your own medicine, you will tetnadamo 3ala ayam rafic hariri.

the result of 7 years of terror from hizbustan.

Lebanon is a jungle! Thats why my dad left long long ago, so sad

kaka, you are an idiot and will always be...

He can criticize HA as much as he wants. He's not any better...soon enough he will have weapons just like them...his shipment from the Saudis is probably on the way.

Get the son and the dad put them on a plane and send them to Yemen ,we dont want such people in Lebanon .

Why do muslims grow beards? It's not very attractive...

Are these people Lebanese? and who finance them

He was thinking Hezb does that all the time, why can't I?
This is why Hezb needs to be reigned in before the disease spreads to all Lebanese.

hehehehe you're so right though.

The one one the left looks like a heroin addict