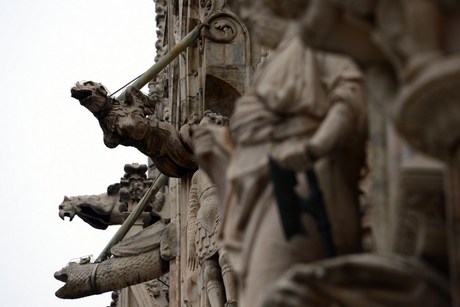 Milan cathedral has launched a campaign to adopt its gargoyles to help it raise the 25 million euros ($32 million) needed to clean up the landmark monument as culture budgets take a hit from the crisis.

Smaller donations of between 10 euros and 100 euros can be made through the campaign's website at http://adottaunaguglia.duomomilano.it.

The pink marble Gothic cathedral, which was begun in 1387, is a much-loved symbol of the city but has to be cleaned up regularly from pollution.

Gargoyles, which are used as drains for rain water, are typical of Gothic architecture and usually depict grotesque figures.

The cathedral's management said it wanted "to encourage the Milanese and citizens of the world as a whole to be protagonists in the history of the cathedral... a priceless treasure that belongs to all of humanity."

Contacted by AFP, cathedral authorities said that since the launch of the campaign last month they had received eight donations of 100,000 euros as well as several smaller donations for a total of 10,000 euros.

Culture has been one of the sectors hardest hit by the financial crisis in Italy. The Italian state allocates just 0.21 percent of its budget to culture, even though it holds half of the world's cultural heritage.