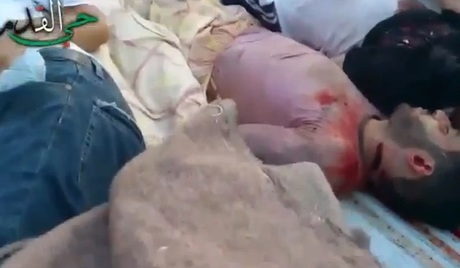 France raised the prospect on Thursday of providing Syria's rebels with defensive weapons as Turkey joined it and the Gulf Arab states in recognizing the newly unified opposition.

France said it would discuss its proposal to ease the European Union arms embargo on both sides in the 20-month-conflict with its partners in the 27-nation bloc, but Russia said any such move would be a violation of international law.

The diplomatic maneuvering came as the Syrian army pressed an operation in areas around Damascus to oust rebels clinging to gains they made in July, and as fighting raged around a key military airport near the Iraqi border.

In Paris, Foreign Minister Laurent Fabius said he would raise the idea of excluding defensive weapons for the rebels from the current blanket EU embargo to help them protect the areas they hold from bombardment by forces loyal to President Bashar Assad.

"For the moment, there is an embargo, so there are no arms being delivered from the European side. The issue... will no doubt be raised for defensive arms," he said, adding: "This is something that we can only do in coordination with the Europeans."

Fellow EU states Germany, Spain, Italy and Poland welcomed the formation of the new National Coalition on Thursday, but stopped short of recognizing it as the sole representative of the Syrian people, echoing the position of Britain.

France on Tuesday become the first Western country to formally recognize the National Coalition as such, the same day its leader Ahmed Moaz al-Khatib called on world powers to arm the rebels with "specialized weapons."

Turkish Foreign Minister Ahmet Davutoglu said on Thursday that Ankara too now "recognizes the Syrian National Coalition as the sole legitimate representative of the people of Syria."

In Moscow, Russian foreign ministry spokesman Alexander Lukashevich said "promises are being made from a number of capitals of massive supplies of modern weapons.

"Outside help to the opposition waging an armed battle against a legitimate government is a gross violation of fundamental norms of international law."

Washington has expressed caution about delivering weapons to the rebels for fear they could fall into the hands of jihadists.

"One of the things we have to be on guard about... is that we're not indirectly putting arms in the hands of folks who would do Americans harm," U.S. President Barack Obama said on Wednesday.

Obama said Washington was encouraged by the formation of the coalition but was not yet ready to recognize it.

On the ground, the army launched air and ground assaults on rebel positions on the outskirts of Damascus, as troops battled to control a military airport in the town of Albu Kamal bordering Iraq, a watchdog said.

Eight soldiers were killed resisting a rebel attack on Hamdan airbase while three rebels died after capturing a security headquarters in Albu Kamal, the Syrian Observatory for Human Rights said.

"If it falls to the rebels, this is huge. It means they control all of the territory from the Iraqi border to Deir Ezzor city."

The Observatory said that video had emerged of the wreckage of a warplane, which local activists claimed was a MiG shot down by rebels in Albu Kamal, but could not confirm the reports.

The Observatory, which relies on a network of activists and medics in civilian and military hospitals, also reported that around 80 bodies of military personnel were being kept at Aleppo military airport.

"The authorities are delaying the handover of fallen soldiers to their families, sometimes over a month after they are killed," it said.

At least 60 people were killed in Thursday's violence, the Britain-based watchdog said, adding that the death toll since the uprising broke out in March last year now tops 39,000.