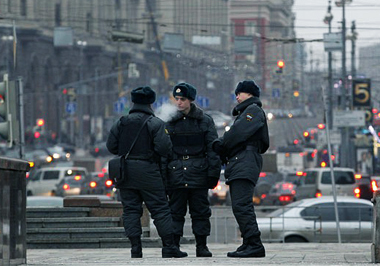 Russian police said Friday that nine men have been charged with organizing cells of a banned Islamist group.

The Interior Ministry said Friday that the men are nationals of Russia and Tajikistan who kept guns, explosives and fake U.S. dollars and euros in apartments they rented near "transport routes of federal importance" in Moscow.

It said that five of the nine men detained Monday are leaders of the Russian cells of Hizb-ut-Tahrir, an anti-Western Islamist group.

Banned in several countries, the group claims it does not advocate violence to achieve its goal of re-establishing the caliphate, a Muslim empire that once ruled the Middle East and stretched to Spain and Central Asia.

An unidentified police official told the Interfax news agency that the men planned a terrorist attack on a railroad station.

it is about time comrades you halt extremism that will ban wodka drinking, and imposes sharia...Dobre Dien.