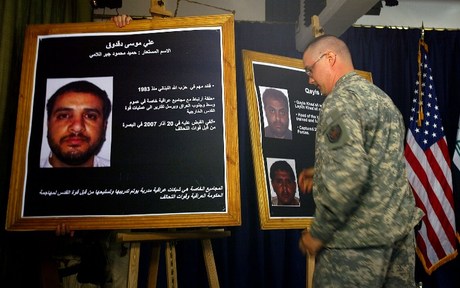 The lawyer for a Hizbullah commander wanted by the United States said his client has been released from Iraqi custody and has been flown to the Beirut.

Lawyer Abdul-Mahdi al-Mitairi said Ali Moussa Daqdouq was released on Friday from house arrest in the Iraqi capital, Baghdad. The lawyer did not provide further information in an email sent to The Associated Press.

Meanwhile, an Iraqi official told Agence France Presse on condiiton of anonymity that "the judiciary decided to release Ali Moussa Daqdouq due to a lack of sufficient evidence," adding that Daqdouq is now in Lebanon.

The U.S believes Daqduq was the mastermind of a 2007 raid on an American military base in the Iraqi holy Shiite city of Karbala that killed five U.S. soldiers.

Two Iraqi courts have found Daqduq not guilty and rejected the U.S. request to extradite the Hizbullah militant.

There was no immediate comment from the U.S. Embassy in Baghdad.

Drones chase funamentalist sunis all the way to somalia, whereas Ha thugs live under the nose of the fbi in michigan and are allowed to form governments sin lebanon. A euro court officialy accused four ha members of killing hariri and yet the eu does not brand ha a terrorist organization!, again the is a tacit allianceof convenience between iran/ha and israel against the majority of suni arabs, each for their own agenda.

100% truth from Realist; The US created hassabala/iran/khomeini/Cool and the Gang to justify its presence next to Saudis: "...look monsieur, we protect you from Shia, you give us oil...", with one caveat: The spell fell back on its sorcerer; abracadabra baby! One more: Soon, the Arab Spring becomes another nightmare!

i thought hezbis were here only to defend lebanon not to fight elsewhere... such a hypocrit party....

In fact, hezbis were made to destroy, and End Lebanon...

Total proof that Hizbcocaine is an illegimate terrist group.

This is old news, I read this article 3 days ago elsewhere I believe.

the only fatso is Nasrallah... He weighs at least 100kg

After years of doing bad hezib think to be lebanease ,and at least do what you say in public"we only use weapons to defend lebanon?