Berri Contacts Meshaal, May Call Parliament to Session 'to Take Stand of Solidarity with Gaza' 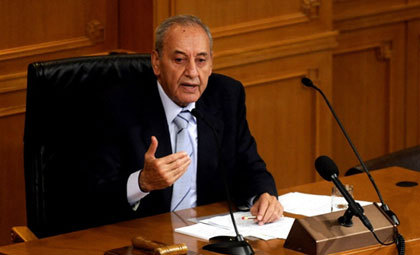 Speaker Nabih Berri contacted during the past two days Hamas leader Khaled Meshaal to condemn the Israeli assault against the Gaza Strip, revealed An Nahar daily on Saturday.

It added that the speaker may call parliament to session, should the Israeli aggression continue, “in order to take a stand of solidarity with the Palestinian people.”

His circles told the daily that this step stems from Lebanon's position and “its closeness to the Palestinian developments.”

“This step is not aimed at cornering the March 14 camp that has taken the decision to boycott Prime Minister Najib Miqati's government,” they explained.

An Nahar reported however that should Berri go through with his plan, the March 14-led opposition may indeed feel cornered “seeing as it has not yet taken a decision on whether it will take part in the parliament session, scheduled for November 27, on the occasion of Armenian President Serzh Sarkisian's visit to Lebanon.”

The daily revealed that the opposition is still holding consultations with its various to settle the debate on whether it will take part in that session.

It had announced its boycott of government-linked activity, including parliament sessions and the national dialogue, in light of the assassination of Internal Security Forces Intelligence Bureau chief Brigadier General Wissam al-Hasan.

He was killed in a massive car bomb in Beirut's Ashrafiyeh district on October 19.

The opposition accused Syria of being behind the crime and blamed the government, which is comprised of mainly pro-Syria allies, of covering up for the criminals.

Israel launched a bruising air, naval and artillery offensive on the Gaza Strip on Wednesday, the most intense assault on the Palestinian territory in four years.

The operation was launched with the assassination of Hamas' top military commander, followed by an onslaught of airstrikes and shelling by tanks and naval gunboats.

What's Berri doing? He's the Parliament Speaker... not the PM/FM or President. Why did he call the Palestinian terrorist? If it was itching him to call someone over there, it would have been appropriate to give his support to the elected president Mahmoud Abbas.

Anyway, the situation is bad in Lebanon, particularly in Saida... for those who can read French I highly recommend today's edition of http://www.lorientlejour.com/

berry is trying to divert attention from the real problems we have, pouring crocodile tears over the Palestinian he once slaughtered.
as well as Palestine is occupied, Lebanon is too by the Iranians, and we need to clean our country.
berry is playing around with the idea of convening the parliament to discuss such a matter while m14 are boycotting the Iranian led parliament. he is trying to find a way to force them to come.

Ya Istez, why didnt you convene the parliamnet when Lt. General Wassim Al Hassan was assassinated? wasn't that a great danger to Lebanon? most Lebanese and me included wouldn't give a rat's ass about what is going on in Gaza, and now you want a special session??? Come on!!! where are your priorities??? the only thing you can do is to convince your friend hassouni not to start firing his missiles across the southern border...and God willing 2013 will bring in a new speaker...

while we all should condemn violence and war, history will not be fair to berri for killing many many palestinian in lebanon with the assistance of the assad regime in the 80's.

Hey Berri.....your hypocrisy is showing. The Syrian people need solidarity too. And the Lebanese need relief from your stealing. Prices are out of control......oh wait the Shia get food cards from Persia and don't pay electricity. They wouldn't feel it like the rest of us.

“This step is not aimed at cornering the March 14 camp that has taken the decision to boycott Prime Minister Najib Miqati's government,” they explained............ of course it is to corner M-14. He is a political animal (I hope I did not offend any animals).

38 dead (most of them Hamas commanders and fighters) in 4 days can in no way be called genocide.
What is happening in Syria is genocide, but no one talks about it.