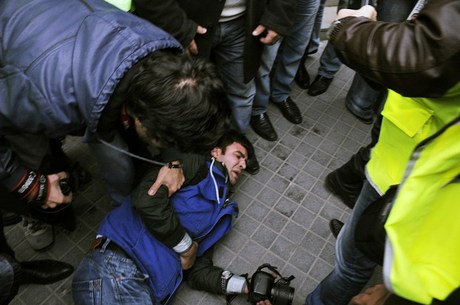 Azerbaijan police broke up an unauthorized pro-democracy protest by opposition activists in the center of Baku on Saturday, detaining dozens of people and beating up several journalists.

Around 100 protesters briefly gathered in the capital Baku's central Fountains Square chanting "Freedom!" and demanding the dissolution of parliament and the resignation of President Ilham Aliyev.

But within 15 minutes, an AFP reporter saw police intervene and arrest at least 30 protesters.

At least two journalists were severely beaten up, even though they were wearing vests identifying them as media workers.

"The authorities have again violated the people's constitutional right to the freedom of assembly, but they have failed to silence the voice of the courageous people who nevertheless express their dissent," said Ali Kerimli, leader of the Popular Front opposition party.

Two members of the opposition Musavat party were also detained earlier in the morning, the party said in a statement.

The protest was the first action by the embattled opposition in the oil-rich ex-Soviet country since the November 2 adoption of legislative changes that increased penalties for organizing or participating in unsanctioned rallies.

On the day the changes took place, police detained around 30 people, and last month broke up an anti-corruption rally, arresting dozens of opposition activists.

Scores of people were arrested in May during pro-democracy protests staged to coincide with the high-profile Eurovision Song Contest in Baku.