2 Rockets Prepared to Be Fired against Israel Discovered in South 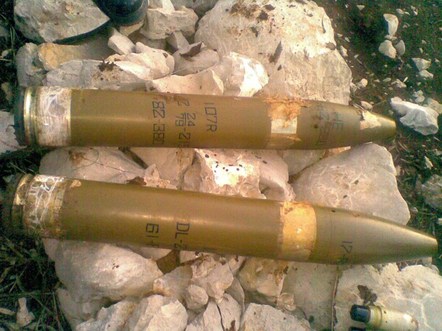 The Army Command announced on Monday that it discovered two rockets, which were set up to be fired against Israel, in southern Lebanon.

It said in a statement that an army patrol discovered the two 107mm Grad rockets between the towns of Halta and al-Mari in the Hasbaya district.

A military expert soon arrived at the scene and defused them, added the statement.

An investigation has been launched in the matter.

Future TV later reported that Israel issued a warning to Lebanon over the rockets that were set up to be fired against it.

Voice of Lebanon radio (93.3) said that the rockets were set up 15 minutes before they were discovered.

The development comes at a time when Israel launched last week an assault against the Gaza Strip that has left over 90 Palestinians and three Israeli dead.

Hizbullah chief Sayyed Hassan Nasrallah had stated last week that the party supports Gaza during its plight, calling on Arab countries to pressure western powers to halt the Israeli operation.

well it is clear hizbushaitan definitely wants to open the doors of hell on Lebanon.
there is no way anyone could have done this without their approval, to say the least.

so they stopped by your place?

Did you see the real photo of these rockets???

Obviously an attempt to discredit Hezbollah ...

I see the photo has now been changed ...

I can only see the democratic and peaceful way m8 thugs respond to comments.
the vocabulary they use denote their high level of education and respect to others.
keep it up guys!
astonishing how much the reality hurts when it unfolds for all to see.
it is easy to understand the dismay of stupid m8 followers when reality comes t light taking away their illusions about the ultimate goals of their beloved hizbushaitan.

Words from Iranian posers dude, so their words have zero credibility to begin with.

Nice to see schizo Farsi BSThrower back to his usual manipulation of posts responding to himself through his female side aka Motormouth. We all know your pathetic (more like desperation) attempt to voice an opinion coming from Iranian cons aka HA.

Photo has been changed for tamwihhhhhh

Typical M8 behavior from rude boy. Why waste your time on the internet? Quick go find some defenseless woman at a pharmacy that you can bring a gang of your thug friends to and go beat up. Wow, you are soooo brave

or granma ghadijeh must have done it! She went to Walmart, saw the rockets, bought them on sale,and thought to advance the holy jihad to please Allah...ain't none wrong with that...She has rights too, you know.

This is exactly why all weapons should be turned to the army.

But the army will never act, as usual!

Because it is up the the government to decide what should be done. Not tribes or militias.

You surprise us all here, well done!

Exactly, not to Persians claiming to be Lebanese.

It could be anyone, kids in leb own a rpg.
Im sure the israelis wouldnt dare to do it again, they got their butt whipped so hard & bad, now all elite israeli soldier have a mental disorder call "hezballa". theu are not ready to die, bit the hezb is.

"they got their butt whipped so hard & bad" What an idiot! Thank God if it was not for the International community that stopped Israel or the country would have been crushed while HA cowards hide in sewers waiting for the smoke to clear! What a lame post. Put your head back in the sand!

LOL no i call hariri a wahabi leader, damn he cant read arabic.
he better stays in paris and improve his french, maybe he can run for: Maire de Paris, after all the other president was his papas best friend!

Take a look at the real photo of these rockets!!!

These two lonely propped up rockets could have been placed by anybody ... This is an obvious attempt to discredit Hezbollah

Are we reading Ha-Ha net?

Are we reading the words of a Persian?

"no one is trying to discredit your beloved hizbula, you guys are so stupid it hurts..."

I am not beholden to Hezbollah but if you will just take a look at how this naharnet ended it is clear they are pointing to Hezbollah ...

"The development comes at a time when Israel launched last week an assault against the Gaza Strip that has left over 90 Palestinians and three Israeli dead.

Hizbullah chief Sayyed Hassan Nasrallah had stated last week that the party supports Gaza during its plight, calling on Arab countries to pressure western powers to halt the Israeli operation."

well said phoenx, regardless of which side one may support, sensible readers will always enjoy reading sensible and rational comments. and Judging by many of the crazy posters on this site, i dont know if being popular is really a good thing imo.

I see the photo has been replaced !

Hizbala tels the army where these missles are, clearly these are not HA missles. People dont just go to war based on emotion and ideology. Hizbala's objective is to conquer lebanon not to liberate palestine. Hizbala, being a sectarian force, has liberated the she3a land in 2000 , so why on earth would it want to destroy its community and achievements?. Of course HA wishes that itcould every once in a while play atit for tat with israel in order to legitimize its weapons in leb, however the 2006 war has changed that forever, hizbala now sends thugs to hums not to galile, sub7an allah, 2009 war on gaza was in ashura and so is today war, and hence another chapter of sectarian hypocrisy. And now with the fall of the syrian regime the Alawite veto over sunis getting arms in lebanon would be lifted. I just hope that the she3as understand the new realities and decide to make peace , the missles will not bring except missles.

Hizbala told the army where to find these missles. Hizbala does not want any trouble with israel. People dont just go to war for 3yoon others and hizbala, being a party that represents the she3a sect, is no exception: 2009 war on gaza and now 2012 both in ashura btw and both hizbala done nothing. The main objective of hizbala is to conquer lebanon and compete with other sects. Of course hizbala would love to do tit for tat with israel every once in a while to prove legitimacy of weapons INSIDE lebanon and so forth but the lessons of 2006 has changed those rules forever. People tend to forget that HA accepted the army and 20,000 UNIFELS in the south i.e 2006 was all theatrical. HA done its dues towards the she3as by liberating their land in 2000, there is no reason it should go to suicidal meaningless wars.

Phoenix stand corrected.....it's IRAN's filthy hands in the region using it's proxies to do it's dirty work destroying countries, lives all while they sit watching from outside like the devil himself. Get rid of Iran and the rest will follow down drain.

Or it could be a decoy or distraction or warning by Hezb..... they can sacrifice a grad for such thing but not the bigger missiles. It could also be the Palastenians as you say. But I find it pathetic that the Hezb has to provide intel for the army.... I want a real state and a real army so bad.

nasrallah said last year that his goal was to invade the north of israel. if iran gives him the green light they ll obey so iran can put the pressure on the negotiations to be held after bashar is removed from power...iran want to pose itself as the indispensable power in the middle east. they don t care if lebanon is under fire and civilians killed. all hezbis do is blindly obey iran...

but to draw conclusions on who planted these missiles is a bit early no? even if we know how tightly hezbis control the south....

but even if it was palestinians, nasrallah shouts that hezb is here to help them and liberate palestine! even if palestinians want to drag lebanon into war, iranman will be very happy as he could then say he didin t do anything and pose himself as a victim as usual because israel would certainly respond thus triggering hezbis response.... iranman could then justify his involvement into war...

the resistance: how doesn t it surprise me that you don t know how to read?

i advise you to go and fetch someone who can read you my post so that you ll understand it...

poor illetterate hezbi follower... are they all like you? need reading lessons? no wonder you so stupid.....

Wasn't it the Hezb who objected to disarming Palestinians (because they are Bashar's tools in Lebanon)? If so then they are just as responsible for any actions the Palestinians take.
One reason I tend to believe Phoennix is that usually when Hezb does something they immediately deny any involvement (such as the case with assassinations). In case lack of denial means they did not do it..... it is warped logic I know, nevertheless it is logic.

the1phoenix
your comments are interesting, however there is another theory:
iran nuclear issue.
what if iran's interest is to have the war here instead of in iran?

This is not the work of Hezb, at this point in time Hezb is worried about getting cover, and helping Assad kill his people.

i adore Lebanon and the good people there but I hate the Hezbo mentality and their daily lies; that's the reason I don't come for holidays to my favorite country;
as long the Hezb are in force I don't come untill the day the are destroyed completely and definitively

Because your leader has not killed or kidnapped any Israelis like he did in 2006. He thought the cost was too high .

Some little toy soldiers have been ordered to trigger a war from Palestine, as well as from Syria and lately from Lebanon (after all other attempts failed to drag us into chaos and civil unrest) all of that to prepare the terrain for the escalation that is going to occur between Persia and the west concerning their nuclear plans