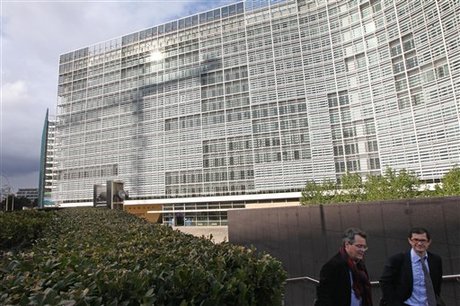 European Union foreign ministers, in a new blow to President Bashar Assad's regime, on Monday said they viewed Syria's just-formed National Coalition to be the "legitimate representatives" of the Syrian people.

A statement from the bloc's 27 ministers welcomed the November 11 formation of the National Coalition for Syrian Revolutionary and Opposition Forces and said: "The EU considers them legitimate representatives of the aspirations of the Syrian people."

"This agreement represents a major step towards the necessary unity of the Syrian opposition," the ministers added.

France, which last week became the first Western country to recognize the Coalition as sole representative of the Syrian people, had urged fellow EU nations to follow in its footsteps.

Monday's statement is a step short of the French stance.

Italy however joined France on Monday and Britain is expected to clarify its position in a parliamentary debate on Tuesday.

The group was formed in Qatar after 20 months of conflict that activists say has killed more than 39,000 people.

French Foreign Minister Laurent Fabius said that all his EU counterparts had expressed "much sympathy vis-a-vis the coalition".

"I think we will invite the Coalition leaders to our next meeting (in December) to allow them to talk to all of the foreign ministers, which will be highly symbolic," Fabius said.

The EU ministers' statement urged the Coalition to continue "to work for full inclusiveness" while respecting human rights and democracy and engaging with all opposition groups and sections of Syrian society.

"The EU stands ready to support this new Coalition in these endeavors and is relations with the international community," it said.

you are a nobody.. so you dont get to classify anyone as anything..
Assad already spit on the diplomatic solution.. so all you really did now is finally have somewhere else to throw the blame.
My heart goes out to all who are subjected to the relentless slaughter of this fake government.
I really dont understand people... Assad is known to have mock elections which have him gaining 99.9% of the vote...
yet some brain cell lacking individuals say that the majority is with Assad... the why the hell didnt he have any REAL elections before...???? what was he so scared of if the people are with him???

and lets not forget the "manufactured US revolution" which started when the butcher's gang tortured KIDS for graffiti...
now you all don't know this.. but theidiotance has inside info that the US actually sent a memo telling Assad to torture kids.. Assad fell into the trap... this is all a charade.. the Syrian people are actually living well, with high employment, low cost of living, free and a-level education... why the hell would they want to revolt????
careful theidiotance ... don't tilt your head.. you're brain might actually fall out your ear.