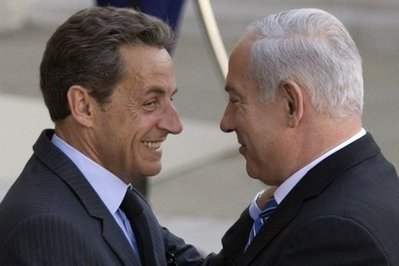 "What I heard from President Sarkozy is that they must recognize Israel as the state of the Jewish people," Netanyahu said outside the Elysee Palace in Paris, after a meeting he described as "good, far-ranging and friendly".

"I heard similar things yesterday in Britain and I think that in Paris and in London there's an understanding that whoever wants to make peace must commit to peace and not to the complete opposite," he told reporters.

"I think that's an important development," he added. "Anybody who wants to destroy Israel is not a partner for peace."

Sarkozy's office responded to Netanyahu's declaration by saying: "France's position is known. It supports the solution of two nation states living side-by-side in peace and security, within safe and recognized borders."

Mahmoud Abbas of the Palestinian Fatah faction struck an accord with Hamas leader Khaled Meshaal on Wednesday, ending a four-year feud and laying the foundations of a new unified Palestinian government.

Israel is concerned that the new Palestinian authority includes militants it considers “terrorists” and those who are dedicated to denying Israel's right to exist as an independent Jewish state.

"If (Palestinian) national unity is unity for peace, then we would be the first to support it," Netanyahu said.

"But if it's unity to move away from peace, pursue the battle for Israel's eradication, then obviously we oppose it and so should everyone else."

A senior French presidential source said Paris was waiting for the makeup and direction of an emerging caretaker Palestinian government to become clear.

"We shall see in the coming days if we get useful clarifications which will allow progress," he said.

Some European leaders, including Sarkozy, have warned they might recognize Palestinian statehood without waiting for a comprehensive peace deal, and would seek a U.N. resolution to confirm it.

Netanyahu acknowledged that such a resolution, if put to the world body's General Assembly when it convenes in September, would most likely be passed.

"Can there be an automatic majority in the U.N.? The answer is yes," he said. "They can say the earth is flat and pass it."

His strategy is to try and enlist the support of Western leaders to oppose the resolution, to abstain, or at least modify it.

"I'm relating at the moment to the leading countries," he said, mentioning the United States where he is to meet President Barack Obama on May 20 and to address both houses of Congress.

He also cited France and Britain, where he met with Prime Minister David Cameron on the eve of his trip to Paris.

"They expect to see a clear statement from those who say they want to make peace with Israel that they renounce the path of destruction, the path of killings, the path of terror and recognize Israel," he said.

On his visits to London and to Paris, Netanyahu has warned that the U.N. option, far from breathing new life into the peace process, could kill it.

He is using Fatah's rapprochement with Hamas, which regularly fires rockets from Gaza into southern Israel, as ammunition in his campaign.

The Paris meeting came as Abbas was in Berlin to meet Chancellor Angela Merkel, who has said Germany will not recognize a Palestinian state before a peace deal.

But, speaking after talks with Abbas, Merkel denied a rift with France.

"Germany and France both want quick progress," Merkel said. "We want a two-state solution. We want to recognize a Palestinian state. Let us ensure that negotiations begin. It is urgent."