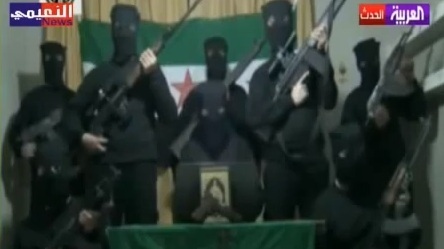 Syrian rebels announced on Tuesday the creation of a security service to "defend the Syrian revolution" in a country that has been awash with feared intelligence agencies for the past five decades.

Its objective is "to be a powerful security shield to protect the sons of the revolution from attacks, arrests and killings," and to hunt down members of the opposition who have committed abuses, according to a video statement by the rebels.

One of the men introduces himself as Colonel Ossama, agent 102, and announces the "formation of the Intelligence Services Administration of the Syrian Revolution-National Security Bureau."

"It must be one of the powerful arms of the revolution against the intelligence network of the government clique and its regional and international allies," Ossama says.

The goal is to "strengthen the capacity of revolutionary political and military forces by providing detailed information on the movements of the Assad occupation forces, shabiha (pro-regime militia) and agents" of the authorities.

The Intelligence Services Administration intends to "remain separate from the revolutionary forces in order to hold accountable those who have committed errors, whatever their position," Ossama added.

Bassem Jaara, director of the administration's political bureau, said that while the intelligence agency has only officially now been announced, "its agents have been working for months to prevent dozens of regime attacks designed to stoke sectarianism conflict."

Jaara, a journalist and member of the Syrian Revolution General Council in Europe, said that "hundreds of soldiers and members of the security services (who are still serving in the state apparatus) work as our informants."

He declined to give the number of members of this unit, but said that they include civilians, soldiers and even former security services agents "whose sole purpose is to protect the homeland and prevent sectarian strife."

The formation of this service was "a decision of the military and the revolutionary movement." It is collaborating with all factions and its command is inside Syria," Jaara told Agence France Presse by phone.

"No revolution in the world can win or survive without such a service which protects it from attacks and infiltrations," he said, adding that the most important task is "to be operational after the fall of the regime to prevent sectarian attacks and looting."

The Baathist regime of President Bashar Assad and his father and predecessor, Hafez Assad, has used a multitude of intelligence services over the past half-century to ensure complete domination of the population.

Informants are so rife in the country that Syrians joke that while other nations have developed intelligence services, in Syria it is the security services which have created the state.