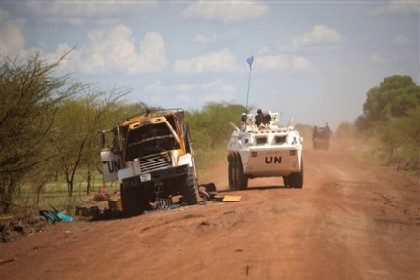 South Sudanese troops attacked a rebel base in the latest violence in troubled Jonglei state, killing at least 19 rebels for the loss of one soldier, officials said Wednesday.

"On the battleground 15 bodies of militia were killed during the attack, later another four were found in the grass,” he added. "We lost one killed in action and four wounded....the militia have been chased away."

After losing out on a seat in April 2010 elections, Yau Yau rebelled against Juba's government, but accepted an amnesty in June 2011, a month before South Sudan won independence from Sudan after decades of civil war.

Yau Yau, a former theology scholar and civil servant who comes from the Murle ethnic group, later returned to rebellion in April.

Local estimates suggest Yau Yau commands between 50 to 300 men, according to the Small Arms Survey, although other analysts suggest that he can draw on as many as 3,000 youth at maximum strength.

The clash, in the Likwangole region of the isolated and swampy state, follows a rebel ambush in August, when at least 24 soldiers were killed.

Both Human Rights Watch and Amnesty International have condemned a string of reported abuses -- including shootings, torture and rape -- as security forces crack down on those seen to support the rebels.

Over 600 people were massacred in Jonglei's Pibor area after an 8,000-strong militia force went on the rampage in December, according to the U.N. mission in South Sudan (UNMISS), although local officials reported the figure to have been even higher.

Jonglei was one of the areas hardest hit in Sudan's 1983-2005 north-south civil war, which ended in a peace deal that paved the way for the South's full independence.

But the new nation is awash with guns, while heavily armed communities that were once pitted against each other during Khartoum's rule remain rivals.