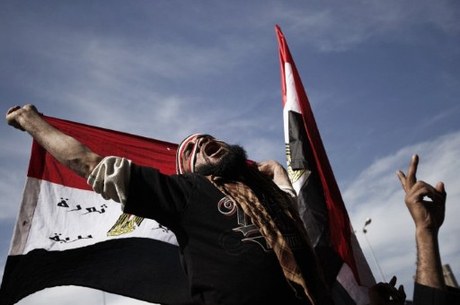 An office of Arab satellite broadcaster Al-Jazeera in the Egyptian capital was firebombed on Wednesday, a security official said, as protesters clashed near the downtown Tahrir Square.

"Unknown assailants" lobbed Molotov cocktails at the office which overlooks Tahrir, "causing a big fire which rescue services are working to put out," the official said.

Television footage showed the damage caused at the office, with burned lighting equipment hanging from charred walls. No one was injured in the fire, according to security officials.

An Interior Ministry official said 118 people have been arrested since clashes broke out on Monday during a protest to mark the first anniversary of deadly street battles that piled pressure on then ruling military to quit power.

Medics said that at least 60 people had been injured in three days of confrontations. One protester, a member of the April 6 movement, is in critical condition, the group said on Tuesday.

On Monday, clashes erupted as protesters tried to destroy a concrete barrier which security forces put up to end last year's fighting with activists.

At least 45 protesters died in the five days of street battles that began on November 19 last year to put pressure on the military, which took power after a popular uprising overthrew President Hosni Mubarak in February 2011.

The military, which responded by vowing to hand over power by June 2012, transferred control to Islamist President Mohammed Morsi after his election that month.

So a television channel owned by a member of the Qatari Royal Family which only recently has shown its support for Hamas is now an Israeli mouthpiece.
How do you manage to reach that conclusion? Do you seriously think that President Morsi will allow an Israeli mouthpiece to keep an office in Cairo? Very doubtable.

Phillipo, why bother? These guys do not research,nor do their comments indicate any type of academic credentials! They think if they study, they become westernized! Their entourage lives on emotions, impulse, ignorance, impoliteness, and violence.
Remind flamethrower that his egyptian brothers killed 85 of each other, at port saiid, at a soccer match, after the Moubarak ousting, as boredom reigned, and had nothing else to do...Therefore, it is impossible to tell them the benefits of cepacol...