Geagea in Open Letter to Berri: We Will Not Perform Any Routine Duty until Assassinations End 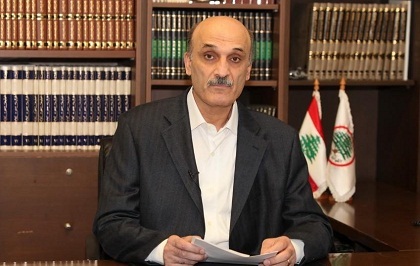 Lebanese Forces leader Samir Geagea issued on Wednesday an open letter to Speaker Nabih Berri, condemning the continued parliamentary meetings in light of the 25 assassinations and failed assassination attempts in Lebanon in the past few years.

He declared: “We will not perform any routine duty until assassinations in Lebanon end.”

“Isn't it a crime to convene parliament as if nothing has happened after the 25 assassinations and failed attempts?” he wondered.

“Tell me, isn't it a crime that six MPs have been killed for political purposes since 2005 without parliament once coming to a stop?” he continued.

Parliament never once halted its routine duties and remained in a constant state of session to tackle these crimes, noted Geagea.

No one was held accountable for the assassinations and no plan was set in place to stop them, he remarked.

“Don't you feel embarrassed to meet at parliament with a political camp that has been legally accused of being behind the assassination of former Prime Minister Rafik Hariri?” asked the LF leader.

Four Hizbullah members have been accused of being involved in the 2005 assassination of Hariri.

The Lebanese authorities have failed to arrest them and they remain at large.

“What kind of political life lives under the constant threat of political violence and assassinations?” Geagea wondered to Berri.

“What kind of political life is this where a parliamentarian is targeted because he has a high chance of being victorious in the upcoming parliamentary elections?” he continued.

“Aren't you covering up the crimes, directly and indirectly, by acting normally after each one is committed?” he asked.

“I believe it is time for us, regardless of our political affiliations, to call for an end to political assassinations,” he stressed to the speaker.

The March 14-led opposition announced its boycott of government-linked activity, including the national dialogue and parliament sessions, in light of the assassination of Internal Security Forces Intelligence Bureau chief Brigadier General Wissam al-Hasan.

Hasan was killed in a massive car bomb in Beirut's Ashrafiyeh district on October 19.

The opposition accused Syria of being behind the crime and blamed the government, which is comprised of mainly pro-Syrian allies, of covering up crime.

Keep it friendly please. Say what you want but don't insult. You're okay so far.

Agree with him or not but that sentence says it all.

Any opinion about what is happening to Gaza Geagea or why the silence?

Samir Gea Gea must must return to jail. He has massacred and committed more crimes against humanity than can be recounted. Some one shut him up? Seems that in our country Justice does not prevail when dirt like him are to roam free.

You got that right benzona. The schizo Farsi pathetically at it again. No need to respond....a conditioned peasant/herder will never see outside the box. They live by aggression (sword) and will die accordingly!

Kaa Kaaaaaaa Karim is loose....they must have opened the sewage gates!

I think the government should resign and let the street rule. What kind of leaders you have, the most action they can take is insulting each other and making speeches, whether M8 or M14. Don't expect Lebanon to change much, since the mentality of the people never did.

In some ways I agree. What's the point of politics in Lebanon? 2ool Allah maybe one day.

Well spoken. this Mickey Mouse goverment is a farce

Zahhet, i am only wasting this minute to answer you because you don't seem to be worth more:
If you have a smart comment share it with us, otherwise keep silent and don't embarass yourself by attacking people without knowing them.

Take English 101 and then come back boullmich!

Do your work or you will not get paid. That's how it works everywhere. If you don't like it, resign.

Yes Karim it is very weird, so stop supporting Berri and Nasrallah (the current criminalls).

Others like him (or even better) were assassinated .... which is the focus of Gaegae's speech.

As if they're performing any duties to start with.

Go to the quwat. Samir beik the next Lebanon president u are the only one who tell the truth

Seriously sick this guy ya FT! I don't know if people are seriously following him! I am sure they would have the exact same reaction in front of their TV even if the sound is off!
It's not possible that someone SERIOUSLY comes up with such statements :)
Get a life! Or at least build a SERIOUS front and then speak up! You M14 guys lost soooooooooo many opportunities just because you don't even have a cause to fight for!

Seriously sick this guy ya FT! I don't know if people are seriously following him! I am sure they would have the exact same reaction in front of their TV even if the sound is off!
It's not possible that someone SERIOUSLY comes up with such statements :)
Get a life! Or at least build a SERIOUS front and then speak up! You M14 guys lost soooooooooo many opportunities just because you don't even have a cause to fight fort!

yeuh yeuh yeuh ;)
Aslan if someone gives us just ONE example when this guy spoke and things were true... I would convert ;)

This is exactly the point! Bass M14 will tell you : haram he did his time in jail so now let's give him another chance ;)

he gave himself? :D He was taken out of jail for anything else than political reasons? Did he say anything that appeared to be valid PLEASE???
since day 1 of this new gov and without even giving this gov a chance he was on ALL SCREENS in the world : we will bring down this government and we will not let this gov succeed and we don't agree to give them a chance. BEFORE EVEN TRYING!
Now explain this to me please? If you think am exagerating google the speech you'll find it and it has tons of fans ;)

phenix amigo read above what I wrote! Ayya war is war? Have you ever seen a criminal like him do politics again??? In any other country?