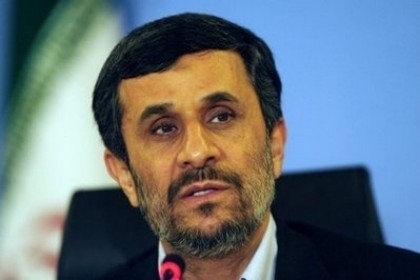 Khamanei and Ahmadinejad have been at odds for months, and it appeared that the president's opponents in parliament were doing the supreme leader's bidding when they summoned him for questioning. Ahmadinejad was hauled before parliament in March, the first time an Iranian president has been questioned by the house.

Instead, IRNA quoted Khamanei as issuing an order to the legislature that said, "We demand that the respected representatives not continue" with the summons.

Khamenei, who has final say on all state matters, said parliament's concern about the economy was positive, but that questioning the president before the body "is what enemy seeks," a reference to the West.

"The country needs tranquility. Authorities also need it to carry out their tasks. People also like peace," Khamenei said.

Parliament speaker Ali Larijani wrote to Khamenei accepting his demand and pledging that lawmakers would not pursue the summons further.

Khamenei's move is seen as an attempt to forge unity among leaders as international pressure over Iran's disputed nuclear program grows. The economic crisis and currency crash are at least partly the result of stiff Western economic sanctions aimed at forcing Iran to abandon its uranium enrichment project.

Earlier this month, lawmakers voted to summon Ahmadinejad over the country's currency collapse. He was supposed to appear in an open session of parliament in early December.

In March the parliament grilled Ahmadinejad over alleged mismanagement of the nation's economy as well as his perceived defiance of Khamenei over the president's dismissal of an intelligence minister in May 2011. The minister was reinstated later at Khamenei's instruction.