Two Rockets Fired from South at Israel, at Least One Lands in Lebanon 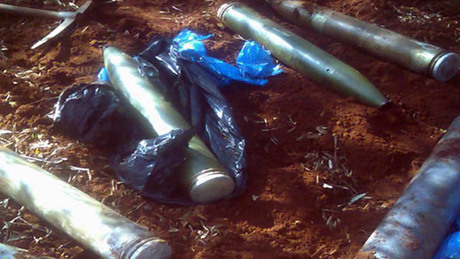 "Two rockets were fired, one fell in what was clearly Lebanese territory, the other went towards Israel," the official said on condition of anonymity. It was not immediately clear where the second rocket fell.

In Israel, an army spokeswoman said: "There are no rockets on Israeli territory."

The Lebanese National News Agency reported that both rockets landed in Lebanon, in Ebel al-Kameh and al-Hamames villages near al-Wazzani river, a hundred meters away from the Israeli border.

Inhabitants of the region said they heard one rocket being fired from the Khiyam plain, while the second's source remains unknown.

In the meantime, the army and the UNIFIL have deployed their units in the region where these rockets landed.

This comes after two rockets ready to be fired against Israel were discovered in southern Lebanon on Monday.

The Army Command said the two 107mm Grad rockets were found between the towns of Halta and al-Mari in the Hasbaya district.

HA/Iran written all over it! Trying to divert attention from Bashar as he slaughters his people! The axis of evil MUST GO!

Oh I do, rather it's just entertainment reading the comments. One day they'll wake up.

I see he's running out of ideas :P

Actually, no, nothing about Hariri, sorry. Have a cookie.

Imagination? it's just common sense, Iranians are not Lebanese..durrrrrrrr

HA isn't that stupid. Only you are @bigsami

Hizballastan. Need one say more about the state of affairs and mindset that will prevail should HA be allowed to take over the country?

Check this article out: http://nowlebanon.com/Arabic/NewsArticleDetails.aspx?ID=459060

it is apparent that iran is upset about the cease fire agreement reached today.
they seem to need to keep Israel occupied away from them so they forget about their nuclear activities

Pure inferiority complex on their part Geha. They love being controlled so any means to float the ayatollah's boat? they'll do.

What they are most upset about is that this war has sealed the divorce between hamas and iran and put hamas back in the arab and now turkish lap. The region is so sectarianly divided after the iraq war and now the Syrian revolution that Hamas cant afford being with iran no more because the palestenian people are also dying in Syria on bashar's hands. Whichever way you toss the coin the demographics of the region will prevail, HA will wake up soon to a brand new reality, they simply have to co-exist, assasinations and insanity will bring them only death /destruction.

such a crude attempt...blaming HA or the mossad is undermining both their capabilities and intelligence. No one ever though to consider any of the rogue Palestinian factions from one of the various refugee camps plaguing our country?

Bullwaste.....put your head back in desert sand. Do yourself a favor...every time you post something your ignorance level exceeds previous posts!

Who ever watched "enta horr" on mtv will see the TRUE colours of "ashraf al Nass" .. They take over the Lebanese university and turn it into a shrine for their filthy militia ! What a joke tfouuuuu

I watched that. Selling illegal phones and other stolen goods. Filth begets filt

F.T, the truth is "resistance" has become such a big corrupted enterprise and hence the latest example of fneish's brother and his millions in bad medicince and the examples are countless, why are you denying the facts?

it's in the policy of cutting fingers,the egyptians/american/european..have cut the farsi finger in gaza,and are in the process of cutting the syrian one.. and the last one is in lebanon..dont worry the master hit will be SURGICAL.

Elemental its funny how you accuse the shia or any hizb supporters of being Iranian when we are all openly proud Lebanese. Yet you clearly say that you are phoenician. I wonder if you still speak the Phoenecian language? oh wait there is no such language anymore oh darn there is also no Phoenecians left! It seems to me that your the one who is not proud to be called Lebanese and an Arab!

The two rockets fired from the south and exploded few hundred meters away were specifically designed for use in the aftermath of an Israeli invasion with Israeli boots on Lebanese ground. The are nicknamed "Zelzalo Ma2hally". The person in charge of the operation just pulled out the wrong stock from the warehouse.

@M8_brainwashers: Lebanese gave 1200 souls against Israel in 2006 were in fact victims of an Idiot who wanted to fight a ruthless Major Air Defense system with rocks and rockets.
Disarm the idiot and his Iranian servant militia so that no one has an excuse to carry weapons and create an unstable heterogeneous country, you really want to stay in bed with Iran then ask them for an Air Defense strategy to supply the state you really belong to and claim that you have roots attached to it otherwise Disarm and make peace with Israel simply because for every 1 dead soldier they normally flatten from the sky few towns and tens of dead innocent people.