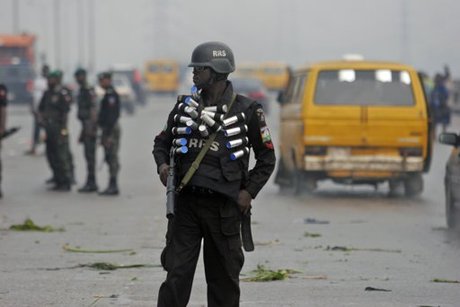 Gunmen attacked a Nigerian police unit believed to be holding suspected Islamist extremists in the capital Abuja on Monday, killing two officers and leading to the escape of 30 detainees.

Authorities however claimed to have re-arrested 25 of the 30 escapees and said no one being held on "terror-related charges" was freed.

The attack on the Special Anti-Robbery Squad compound in the pre-dawn hours resulted in a gun battle, with police claiming to have repelled the assailants and arrested two of them.

It was not immediately clear who was behind the attack. The raid was similar to others carried out by Islamist extremist group Boko Haram, but criminal gangs have also committed violence under the guise of the group.

In a recent report, rights group Amnesty International said more than 100 people accused of links to Boko Haram had been detained at a Special Anti-Robbery Squad police station in Abuja.

"In the confusion that ensued, about 30 suspects in the detention facilities of (the squad) broke out of the cells and attempted to escape," a police statement said.

"Tactical and coordinated efforts to re-arrest the fleeing suspects yielded instant results. So far, 25 of the suspects have been re-arrested, while five suspects originally being held in relation to robbery related offenses are currently at large."

It added that "no explosive or IED-related materials were used in the botched attack."

Members of Boko Haram have carried out scores of attacks in northern and central Nigeria, including against police stations and sometimes with the intent of freeing jailed members.

An Agence France Presse journalist who visited the scene saw the main gate outside the police unit heavily guarded, including two armored vehicles, six police trucks and more than a dozen armed policemen.

It was not immediately possible to determine whether the complex had suffered damage.

In June 2011, a suicide bomber sought to attack police headquarters in Abuja. That attack saw a powerful explosion rip through the car park inside the compound, leaving at least one police officer dead.

The special anti-robbery unit attacked Monday is in Abuja, but not at the headquarters compound.

Boko Haram has also been blamed for the August 2011 attack on U.N. headquarters in Abuja which killed at least 25 people as well as the April 2012 bombing of an office for a prominent newspaper in the capital.

While the group has claimed responsibility for scores of attacks, criminal gangs and imitators have also carried out violence under the guise of the group and determining who is responsible is often difficult.

Boko Haram has claimed to be seeking an Islamic state in Nigeria, Africa's most populous nation and largest oil producer roughly divided between a mainly Muslim north and predominantly Christian south.

However, its demands have repeatedly shifted and it is believed to include various factions with differing aims.

In addition to attacks targeting symbols of Nigerian authority, it has also bombed a series of churches. Muslims have however often been its victims, including community leaders in Nigeria's restive northeast, where Boko Haram has been based.

On Friday, Nigeria's military offered hundreds of thousands of dollars in rewards for information leading to the capture of leaders of Boko Haram in a statement that listed 19 alleged senior members of the group.