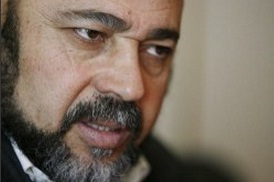 Iran must reconsider its support for the Syrian regime if it does not want to alienate Arab public opinion, the deputy chief of the Iranian-backed Palestinian movement Hamas said on Monday.

"Iran's position in the Arab world, it's no longer a good position," Mussa Abu Marzuk, whose movement's politburo had been based in Damascus, said during a briefing to reporters at his new headquarters in the Egyptian capital.

"It has to address its position, so as not to lose public opinion," he said.

Hamas, which controls the Gaza Strip, relocated its leadership from Damascus to Qatar and Egypt after a rift with Syrian President Bashar Assad over his brutal crackdown on the revolt against his regime that began in March last year.

As a result, his Islamist movement is no longer as close to Tehran, which supplies weapons to Palestinian militants, as it once was.

"Iran asked Hamas to adopt a closer position to Syria. Hamas refused, and this has affected our relationship with Iran," Abu Marzuk said.

Hamas chief Khaled Meshaal confirmed last week that Iran "had a role in arming" the movement's militants in Gaza during their eight-day conflict with Israel, and thanked Tehran, despite the disagreement over support for Assad.

Tehran should have been the start of the "spring". But the mullahs had an opinion that differed from the people. And slaughtered and suppressed their people when they stood up and said "WTF?". And there are "humans" who think these mullahs are a "good" people. In 2013 they won't find it as easy to supress them. I'm sure weapons will be made available if they decide that brutality is the best responce. Just like assad.

this would be called the persian spring. And I dont think it will be much longer before we get some popcorn and watch some of these great persian cities under civil war... The mollahs can even get Hezbollah to resist human rights over there. In iran, they should try the equation:
Mollah- Frustration- Resistance.

Iran and Arab sympathy? Are you out of your mindless-brains?

Feeling the heat of isolation are we @theresistance?

Putting Hamas down to elevate Iran and HA is the worst act one can do and this from "ashraf el nass".

I like how the obvious was just pointed out.

said the guy who misquoted Churchill.. fool you still showing your face around here? nobody takes you seriously after your last brain lapse.. which you might not remember due to your constant state of.... yup ... you guessed it... brain lapse..

someone penned a large check for Qatar? the country with unimaginable wealth.. and the highest GDP in the world was waiting for a check?? you should debate with a slug from now on... you were kissing their booty not long ago..

love4bachar. Your avatar is a white dove. Wouhahahahahaha
Hahahahahahahaha that is the funniest thing i seen all day....
So Bachar destroying Syria by loading his cluster bombs on doves now?

I can imagine just where you're getting the cannabis you've been smoking :P, don't really need to think hard.

Hamas is the only real resistance....abandon nasrocrap, he's driving you down the drain....

What is the 'cause' that iran and HA are supporting in Syria?? The genocide of the syrian people is what they aresupporting. Why so sectarian ya @ resistance? Is this what you learned from imam hussein? Bashar is equal to yazeed and people who have morals and principles do not pick and choose where to apply them. Again i hope you wake up because we want peace in lebanon. The missles will not bring you peace because other muslims will have the missles too and fehmak kfaye. Wake up bro.