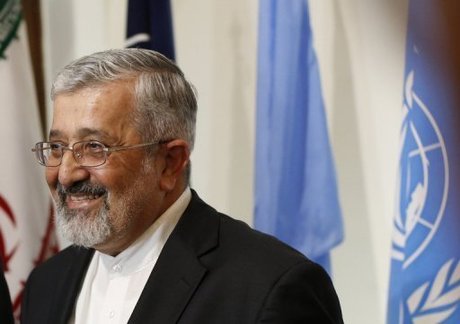 A U.S. announcement that a conference on a Middle East free of nuclear weapons cannot be held as foreseen is a "serious setback," Iran said Monday, accusing Washington of protecting Israel.

"The U.S. cannot unilaterally decide for the sake of Israel to announce that the conference cannot be held. This is a very serious setback for the non-proliferation regime,"Iran's ambassador to the U.N. atomic agency told Associated France Press.

"In a nutshell the U.S. has taken the Middle East nuclear-weapons-free zone hostage for the sake of Israel," said the envoy to the International Atomic Energy Agency, Ali Asghar Soltanieh.

"It is clear now for us and the whole world that the U.S. does not have genuine political will for a Middle East being free of weapons of mass destruction. It wants to continue Israel having a nuclear weapons capability, which is a threat to the Middle East and of course to international security."

The U.S. State Department said Friday that the gathering, which a 2010 nuclear Non-Proliferation Treaty (NPT) review conference decided should take place, could not now happen in Finland before the end of the year.

The 2010 conference mandated the U.N. secretary general, the United States, Britain and Russia to appoint a facilitator, and in 2011 Finland was tasked with organizing the conference.

The State Department said the decision was taken "against the backdrop of turmoil and dramatic political change taking place in the Middle East and Iran's continuing defiance of its international non-proliferation obligations."

U.N. leader Ban Ki-moon said Saturday that he was now aiming for the conference "to be convened at the earliest opportunity in 2013."

The U.S. announcement was no surprise given that Israel refuses to confirm the widespread assumption among experts that it has nuclear weapons, or to sign the NPT, and while NPT-signatory Iran is suspected by many in the international community of seeking to also get the bomb.

Iran boycotted an earlier meeting a year ago in Vienna on creating such a zone, calling it "useless", but Soltanieh announced on November 6 that his country would attend the Helsinki gathering.

Israel had not yet said whether it would go, but the head of the country's nuclear agency said in September that the "current volatile and hostile" situation in the region was not "conducive" to the creation of such a zone.