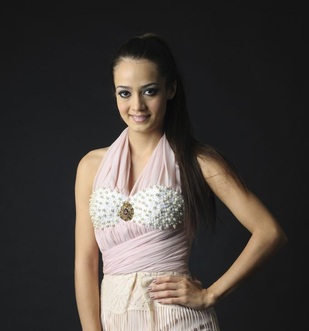 A 22-year-old Mexican beauty queen was killed in a gunfight between soldiers and a suspected gang she was riding with in the northwestern state of Sinaloa, prosecutors said Monday.

Authorities suspect that Maria Susana Flores, who was the Woman of Sinaloa 2012, was part of the gang and may have fired a gun in Saturday's violence. An AK-47 assault rifle was found next to her body in the group's car.

"She was in the criminal group that clashed with army service members," Sinaloa state prosecutor Marco Antonio Higuera Gomez told a news conference.

He said a forensics test was positive for gunshot residue on her body, suggesting she fired a weapon.

Two men and two women, including Flores, and a soldier died in the gunbattle in the municipality of Mocorito.

The army seized seven AK-47s, a grenade launcher, two grenades, a 40mm-caliber rifle, a handgun and around 1,000 cartridges.

Mexican media say the brunette, who participated in the Miss Oriental Tourism pageant in China in May, was traveling with her boyfriend, a suspected hitman, when the shootout erupted. The boyfriend also died.

The armed group is linked to Orso Ivan Gastelum, the suspected leader of a group of hitmen working for the powerful Sinaloa drug cartel.

Families and friends held a funeral in the state capital of Culiacan on Sunday, covering Flores in a veil amid a heavy military presence.

On its Facebook page, the organizers of the Nuestra Belleza Sinaloa pageant voiced their "deepest condolences" for the death of Flores, who was a "charming and happy young woman with a great future."

Flores was not the first state beauty queen to be embroiled in a gang-related incident.

In December 2008, Laura Zuniga, the winner of the Nuestra Belleza Sinaloa pageant that year, was arrested in the western state of Jalisco along with seven suspected Juarez cartel members.

This is sad. Useless violence.