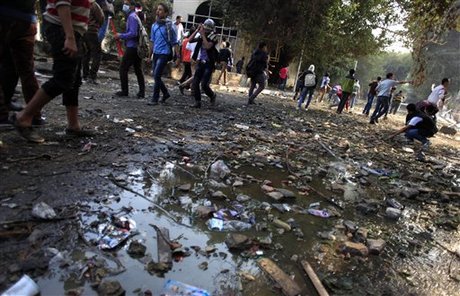 Clashes erupted Tuesday between supporters and opponents of Egypt's President Mohamed Morsi in the Nile Delta city of Mahalla, amid a day of nationwide rallies against his assumption of broad powers.

A security official told AFP that both sides threw stones as the protesters enraged by Morsi's adoption of sweeping powers tried to storm the headquarters of the Muslim Brotherhood's Freedom and Justice Party, formerly headed by Morsi.

The Islamist FJP party said on its website that 80 of its followers were injured in the clashes, and accused police of ignoring requests to intervene.

In the coastal city of Alexandria, the Brotherhood ordered its members to evacuate from their headquarters as it came under attack by protesters, the group wrote on its Twitter account.

At least three people have been killed in violence since Morsi decreed on Thursday that his decisions could not be challenged by the judiciary.

On Tuesday, tens of thousands of protesters rallied in Cairo's Tahrir Square against the move, in a scene redolent of mass rallies that toppled president Hosni Mubarak in early February.