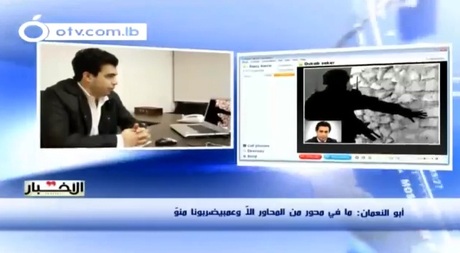 Al-Akhbar newspaper unveiled on Thursday a taped conversation between al-Mustaqbal MP Oqab Saqr and Abou Nehman, a “leader in the armed Syrian opposition”, during which they apparently agree on a weapon delivery deal.

"Please help us, we need weapons,” Abou Nehman tells Saqr in the audio recording posted on the newspaper's website and aired during OTV's evening newscast.

"Tell me exactly what do you want and the quantities,” the al-Mustaqbal MP answers.

The two men then agree to, “as usual”, hand the weapons to Syrian opposition members that go by the names of Abou Baraa and Abou al-Nour.

Saqr, in his most recent interview on Future TV on November 7, rigorously denied any involvement in arming the Syrian opposition, demanding his accusers “to sue him if they find any evidence proving his engagement is such activities”.

Hey Hassan first lay off drinking the sewage it's turning you into a shocked yellow eyed zombie, although the odor has improved. Not even Al-Manure wanted to touch this "evidence" they gave it to OTV.

that's kind of weird though, was he taping himself or was the caller taping him? Either way it doesn't make sense since both would want the utmost secrecy in this transaction. Maybe that's not even him on tape.

true...
might also be just spam
you cannot believe anything in the news nowadays

One part sends weapons, the other sends fighters with their weapons. No surprises here, its an open SECRET!

so what? He gave them weapons and he supports their cause. At least he is not killing each Lebanese who has balls, and he is not stealing our customs money like other people.

I dont think he has access to our tax money. he is not a minister. But if he did use the tax money, it would be well spent money : Bringing down bachar is a good thing. The Assads are the single factor that caused the most harm to Lebanon for the past 40 years. More so than Israel, more so than the palestinians, more so than Iran, Qatar, the USA combined.

WRONG! THE LEBANESE ARE the single factor that caused the most harm to Lebanon for the past 40 years. More so than Israel, more so than the palestinians, more so than Iran, Qatar, the USA combined.

and what cause is that,,,, turning syria for the lost khilafa,,, hahahahah u

Since when you Hezbollah nawar pay taxes?
Pffff
Arming the FSA and shouting it on the roofs
Wou rouh ballit el baher

Habibi - this a losing battle. Bashar will be finished with or without the Hizb. The problem is what will come next: a unitary country or civil war?

Agree with that FT. Hope you remember that when the day geta here. They have STINGERS!!!

Continue the good work Okab Sakr, the regime is falling. The airport in Damascus is shut and soon Assad will hang or be shot hopefully.

Yes. So what, asks cheikh Saad al-Haribi Telteyn al-Marajil, aka lebanon_first while the Syrian flag flutters way higher than that of Lebanon??? After all, Al Mustaqbal al Ta3ees tells us they are not involved in the flow of arms at all! I personally believe them because they are very believable based on their track record. And when they say "arms" they actually mean food and beverages and first-aid kits but say arms only to scare the Syrian regime forces. In any case, I do not believe that the voice in the reocrding was that of Oqab Saqr because that voice was of a man!

Who Cares. People who voted for him will regard him as a Hero. Everyone knows that March 14 are With Opposition and March 8 are with Government. Same as Hizb sending Men to boost army. no need to be shocked :)

The Hezz and Iran are sending troops and weapons there daily. I would like to know the time frame of when this "request" was made.

Either way, true or untrue, the Hezz have had people there for years. I say screw them. Let their benefactor fall. If it is true I am fine with it. It is a way for M14 to hit back indirectly for the way the Hezz made the Leb. gov't fall in a coup. All is fair in love and war. the Hezz don't always get their way nor do they always win. When they fall they will fall hard. This is only the beginning.

Although i share what you feel about the syrian issue, i think we as Lebanese should not interfere in it, and mind our own business as we are already deep enough in shit.
we should concentrate on trying to get out of it

I agree with trigger.
let Syria solve its issues, and let us focus on ours.
hizbushaitan is our major problem and we need it solved. although I believe the fall of the Syrian regime will be a big blow to hizbushaitan, it will not solve our problem totally.
it is about time we take action to solve this problem internally.

He flame thrower.....the best is winning. It isn't the Hezz or Bashar. It is time for payback for all the politicians and journalists they killed in Lebanon.

i ll remind you of that ecah time aoun accuses others....

This is the joke of the week..

Oh the horror! Sakr is providing light weapons to the unarmed civilians to help defending them selves and fend off the brutal that is torturing killing and raping his people.

Lets all give a hand to FlameThrower, this justifies Hizbullah's stand of enforcing this brutal regime indiscriminate hand. Shame on Sakr, he should've allowed this dicator to massacre his people without resistence! Shame on Sakr what a horrible neighbour he is to the syrians! TFEH!!

lol formerlebaniz, I liked your ending

Dear sir, In Japan, as of 12 Nov 2012, the Government side, amazingly, before the head of newly formed Syrian National Coalition and Opposition Force was recognized. Today, following their work, 5th meeting of the Friends of the Syrian People International Working Group is kicked off in Tokyo.http://www.mofa.go.jp/announce/announce/2012/11/1113_01.html
http://www.mofa.go.jp/announce/event/2012/11/1114_01.html

I'm very proud of his actions.That's the least we can do...

Who cares if this is a true recording (and I hope it is). Arm FSA and destroy assad and hezbollah. Don't comment if you have nothing new to say. I've heard it all, so sick and tired of the hypocrisy on these forums. At least say, yes I know hezbollah is in syria helping assad fight this dirty fight - don't give me they are there protecting the Lebanese in syria - freaking joke. The more you try to defend hezbollah and aoun and anyone in m8 the more you sound obtuse and show the difficulty you have in grasping the concept of reality.

The tape was leaked by the ministry of telecom, or the army intel. We all know who's running these mafia organizations. It's been known for months that sakr is playing a role in arming the FSA and bravo 3ale. Finally an M14er with balls!
Haters to the right

then dont blame the syrians if they come back to this country if you are already interfering with their business and sending arms to their country.
then all our sissy politicians will be pro Syria as they were before 2005. bunch of crappy politicians in a crappy country where everybody lies to everybody and everybody is waiting for an opportunity to steal and rob everybody.

it is not the fact of being pro syria or not! if syria lives as a neighbor and DOES NOT impose itself over lebanon why should we be against? But a totalitarian regime that has occupied lebanon , built a system of corruption, killed many lebanese, of course one should be against it! except M8 which thank syria for all that...

syrians enjoy life as much as lebanese, same habits, same way of living... syrians are not enemies of lebanon but their regime praised by M8 is...

Saqr must be buying them from hizballah
lol

Yet more proof of the Saudi-Qatari interference into Lebanon and Lebanese politics.

The boycott and stubborn ill advised stalemate can be laid at the doorstep of Saudi Arabia and Qatar.

were you so offensed when samaha got caught? lol hypocrite....

Is sending arms worse then fighting in Syria? I agree that he should be sued for illegal arm smuggling (if true) but Hezballah must be sued for crimes and war crimes

Syria and iran have been supplieng ammunition to hizbulshaytan and other fractions in lebanon for the past 30 or 4o years (even more) , killing and raping our country and many important political figuers ... so i dont see anything wrong for mr ukab saqr to aid the syrian opposition in fighting againt a tyrant and brutal dictator or regime ... i actually salut him !

And where I don't see a problem is there was so much weapons that poured in from syria to lebanon. Heck. We are just sending them back. Lol