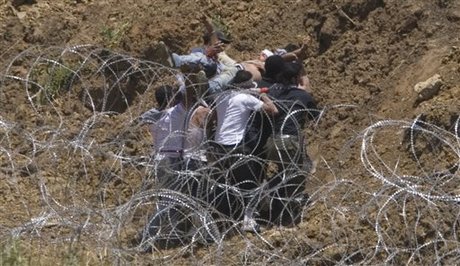 Two Austrian soldiers stationed with the U.N. force on the Golan Heights were shot and wounded in Syria while their convoy was traveling to Damascus airport on Thursday, the defense ministry in Vienna said.

The two troops, whose lives were not in danger, were part of the Austrian contingent of the United Nations Disengagement Observers Force (UNDOF) on the Golan Heights and were traveling to Damascus airport to fly back to Austria after their tour of duty, the ministry said.

Two more soldiers in the Austrian convoy were lightly injured by fragments, it added.

It was unclear whether the shooters were Syrian government forces or rebels fighting to overthrow President Bashar Assad's regime, according to a ministry spokesman.

One soldier was shot in the arm and the other in the shoulder, but both were quickly treated by an accompanying doctor and the convoy was now at the airport.

"That Austrian peacekeepers are shot at must be condemned in the strongest terms and demands appropriate consequences," they said in a joint statement.

"The Austrian government will do everything it can, along with the U.N., to make sure this incident is resolved clearly."

Spindelegger had instructed the Austrian embassy in Damascus to file a protest with the Syrian government, and the Syrian ambassador in Vienna was to be summoned to the foreign ministry on Thursday to give an explanation.

"Syria is responsible for the safety of our UNDOF soldiers and must ensure that they can fulfill their international mandate," Spindelegger said.

"At around 12 noon (1000 GMT), and while a terrorist armed group was firing towards an army post in the area of Aqraba, the shots hit a vehicle of UNDOF, leading to the injury of two members of those forces," it said.

Some 170 Austrian U.N. troops were at Damascus airport Thursday -- 100 of them waiting to be flown out as part of their regular six-month rotation, 70 others on their way to the Golan Heights, according to the defense ministry.

The situation there was quiet at the moment, it said.

Syrian troops mounted an assault on rebels near Damascus on Thursday, closing off the road to the airport before later securing it, authorities said, amid a widespread telecommunications outage.

Austria contributes some 370 soldiers to UNDOF on the Golan Heights, near Syria's border with Israel. The situation in that region was currently calm, the defense ministry said.

Israel captured the Golan from Syria during the 1967 Six Day War and annexed it in 1981, in a move never recognized by the international community. The Security Council established UNDOF in 1974 to enforce a ceasefire between Israeli and Syrian forces.