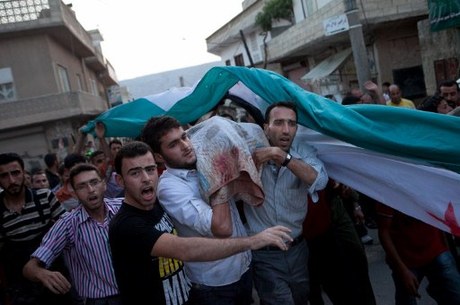 Fighting raged around Damascus on Friday as Internet and phone links in Syria remained cut for a second day and rebels consolidated gains in the east, capturing an oil field near the Iraqi border.

The Syrian Observatory for Human Rights said the road from the capital to Damascus airport had reopened, a day after fighting during which a bus carrying airport employees was hit by a shell, killing two people.

And the 27-kilometer (17-mile) road remained perilous. Unknown attackers fired at a U.N. convoy leaving the airport for the second day in a row, a U.N. spokesman said, adding that there were no casualties.

On Thursday, four Austrian soldiers from the U.N. Disengagement Observer Force for the Golan Heights were wounded when a convoy heading for the airport was attacked.

Air traffic resumed on Friday, and the airport road was reopened after a night of heavy clashes between rebels and troops in the area, airport sources said.

But warplanes pounded the northeastern town of Irbin amid shelling of orchards in the south of the capital, all opposition strongholds where rebels have rear bases, it added.

At least 16 civilians were killed in an army offensive and clashes around Damascus on Friday, including near the airport road and in Daraya to the southwest, the Observatory said.

A military source in Damascus said the army had taken control of the western side of the road leading to the airport and a small portion on the east by dawn, allowing travelers to move through.

"But the most difficult part is yet to come. The army wants to take control of the eastern side, where there are thousands of terrorists and this will take several days," he said, using the regime term for rebel fighters.

The army, meanwhile, withdrew from Omar oil field, one of the last regime positions east of Deir Ezzor city near the Iraqi border, giving rebels control over the country's major fields.

The regime has been reducing its territorial ambitions to focus on Damascus, central Syria and Alawite bastions, as it digs in for a long war, according to analysts.

The Observatory, which reported 81 killed nationwide on Friday based on information from activists and medics on the ground, said most phones and Internet networks were down for a second straight day.

Google and Twitter said they have reactivated a voice-tweet program, last used in 2011 when the Internet was shut down in Egypt during its revolution, to allow Syrians affected by the shutdown of the Internet to get messages out.

Meanwhile, U.N.-Arab League envoy Lakhdar Brahimi warned alongside Ban that Syria is in danger of becoming a "failed state" as he appealed for new international efforts to reach a political settlement.

He warned that the crisis could see "the state and its institutions withering away, lawlessness spreading, warlordism, banditry, narcotics, arms smuggling and worst of all the ugly face of communal and sectarian strife take hold of Syria."

The U.N. estimates there are more than 460,000 refugees in countries around Syria and in North Africa. with another 20,000 in Europe, Ban told the U.N. General Assembly.