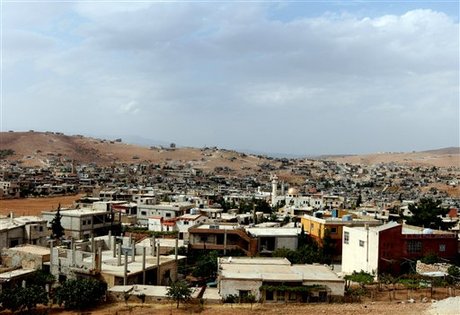 A clash erupted on Sunday between Lebanese army troops and members of the rebel Free Syrian Army on the border between Syria and the Lebanese region of Bekaa.

“Today at 6:30 p.m., an army post in the border area of Masharii al-Qaa came under gunfire from armed men on the Syrian side of the border, which prompted troops to fire back,” the Army Command said in a statement.

“No casualties resulted from the clash,” the statement added, noting that “normalcy has been restored and army units have reinforced their security measures in the area in order to protect citizens and confront any attack.”

Earlier on Sunday, al-Manar television quoted a security source as saying that "fierce clashes erupted between the Lebanese army and members of the Free Syrian Army in Masharii al-Qaa in the Bekaa."

For its part, LBCI television described the incident as the first clash of its kind between the two sides.

“The clash broke out when a Lebanese border patrol detected opposition fighters on the border and the gunmen opened fire to prevent the patrol from proceeding any further,” a Lebanese military source told LBCI, noting that the incident did not cause any casualties.

On September 22, the Army Command said a group of Free Syrian Army rebels infiltrated the Bekaa town of Arsal and attacked a Lebanese army post in the area.

Since the beginning of the Syrian revolt in March 2011, there has been frequent infiltrations into Lebanon by both the Syrian army and rebels fighting to overthrow President Bashar Assad's regime.

Don't know if it is true because of the source--give me collaboration from other sources. In any case, no matter the parties involved, the Lebanese army should fire back on any group who fires on them.

look how u still cover up for the evil bashar regime.. at least normal people condemn BOTH the FSA and syrian army for shooting at Lebanon.. where as brainwashed people like to always create excuses (:

lol if israel does the exact same thing you d cry like a virgin... double standards as usual...

once the Lebanese government stops assisting the Syrian regime, we might be on the way to recover our country.

so then why do you accept that hezbis train sunni extremists in tripoli, palestinians in the bekaa... and who refused the army to enter the south for decades? now you are accusing M14 of doing so in the north? lol! the army is there in case you don t know! no one prevented it from doing its job there unlike your hezbis friends in the south!
you are the one accusing those against you of being sionists! lol
if one brands the others it s you my friend...

you are so funny with your double standards, a piece of art really!

"as for sunni extremists being trained by hezb that's a bit too far fetched from you and very stupid to make such an allegation."
just read about it...
hezb and islamic jihad...their leader even said it:) seems a lot of thing escape your knowledge...

poor FT still in denial mode, i said just read about it... but seems you are iletterate...

peace
even when the guys in charge of jamaah islamia goes on TV saying they are financed, armed and trained by hizbushaitan, ft will still defend blindly his masters and deny it :)
what do you expect from a disoriented lunatic fanatic seeing bashar his ultimate idol crumbling down the drain to say or think?

what does this make our army? a useless bunch being paid with our money.

FSA are terrorists, mixed with rebels from Libya, Egypt, Saudi Arabia, Jordan, Afghanistan, Pakistan, Yemen, and does them like no other terrorist countries like: USA, Israel, Turkey, France and GB. All of these states are before an international tribunal to remember in those stupid headers!