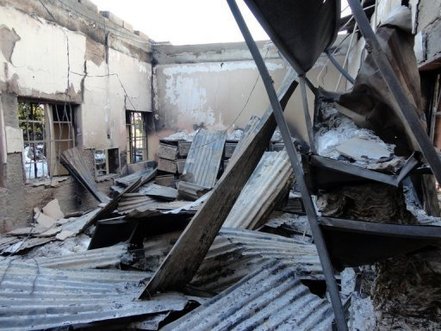 The explosions occurred in Kano, the largest city in northern Nigeria, and Maiduguri, the northeastern city at the heart of Boko Haram's insurgency.

A blast outside a mosque near Kano's main textile market went off around 8:30 am in an area where traffic police were stationed, residents said. The area was later cordoned off by troops and policemen, Agence France Presse reported.

Police said the blast was caused by a "time-bomb" and left three traffic police and a passerby wounded.

"There was an explosion around the Kantin Kwari market targeting some traffic personnel," police spokesman Magaji Majia said.

"Four people were injured. They included a federal road safety personnel, a Hisbah personnel and a state traffic warden as well as a passerby."

The Hisbah are the local sharia police.

Residents of Maiduguri reported a huge explosion but did not yet know details.

"There was a very heavy explosion this morning that shook the entire city," a resident said.

Violence linked to Boko Haram's insurgency has left some 3,000 people dead since 2009, including killings by the security forces.