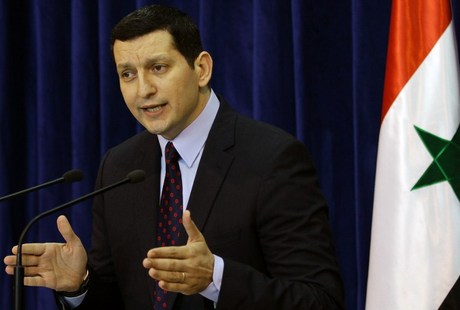 “Maqdessi left Damascus for Beirut and from there he headed to an unknown destination,” Jamal al-Wadi, the director of the office of revolutionary movement of the Syrian National Council, told Sky News Arabia television.

The Syrian Observatory for Human Rights said Maqdessi has “resigned” and is headed for London.

"Maqdessi was pressured by people inside the presidential palace, but not the president himself, to resign. He is now on his way to London," Observatory director Rami Abdel Rahman told Agence France Presse, adding that he had left with his family from the Beirut Rafik Hariri International Airport.

"The entourage of the president was disturbed by frequent media appearances by Maqdessi and some of the statements he made," Abdel Rahman said of the diplomat, who maintains an official Twitter account.

A native Arabic speaker and fluent in French and English, Maqdessi conducted his thesis in London while working for the Syrian embassy.

Maqdessi had come under criticism of late by the ministry, the cabinet and by state media officials at the presidential palace, according to friends. However, he maintained his loyalty to Assad.

Meanwhile, Lebanon's al-Jadeed television said "Maqdessi left for London via the Beirut airport after tensions in his relation with the Syrian regime."

Later on Monday, the rebel military council of Damascus and its countryside said regime forces torched Maqdessi's house in al-Mazzeh neighborhood in the Syrian capital.

more to come, and fast.aoun should be the one following.

no way he is on too slow to understand the situation

He will be slow, soon he will start using a walker.

One day soon we'am wahab will defect, and he will pay tribute to the rebels, again there's an earthquake coming, hizbustan will lose many fake allies and will be left alone to face unprecedented isolation in the suni arab world.

Let Israel shake its fist at Lebanon, and everybody but Hezbullah runs for the toilet, but the old ones are too slow. Slavery is most powerful in the mind of the slave: playright Anton Fugard said in South Africa that "the secret police are in your head." Look around you, Lebanon: Napoleonic France is finished! You are free! Time to start acting free.
Joke: the American and English generals prepare for the battle. The English general says, "Bring me my red coat, so if I am wounded, the troops will not see the blood and lose heart." The American general says, "Bring me my brown pants..."

It seems that the end is becoming very near.
I know many said this a lot in the past 2 years, but I think it's safe to say it now. No matter what Russia, the US or the Arabs say, the truth on the ground is that if the battle in Damascus lasts for another week, Aleppo will fall and the regime will be confined to a couple of pockets on the whole territory, namely the heart of Damascus and the Lattakia region.
And then... the massacre will start... sadely but inevitably.

Ha ha ha ......I am laughing out loud!!! Where are Flame_ Retardant and his friend Poor_Instinct to comment??? How much does anyone want to bet that Nassy, ASSad ans Aoun conveniently will forget to mention this defection too??

at least he left walking....not running in his pyjamas.i respect him becose he sent his wife and kids to beirut b4 him,not leaving them and he is not a military general, bravo jihad.

we only need you to entertain us FT... and you're good at it!

Asaad Mustafa, a former agriculture minister, told Al Arabiya that Makdissi was expected to defect because “the scale of falsified information he was asked to report was unbearable.”

But I thought nasrocrap's friends said that nothing was going on in Syria!!!! And Auon said months ago that the "issues" in Syria will be over in "a week"...

FlamingTurd's a genius, between mid March 2011 and late November when the magnificent GMA made his idiotic remark during his idiotic weekly Tuesday press conference that the Syrian revolt being over by next Tuesday, the fearless pres. Bashar was murdering the defenseless Syria people, because they opposed his regime, like his dad used to the Lebanese :), but he needed more time to murder them all (: as we know the Syrian army is incompetent (: and they can only defeat an enemy when the opposing cowardly general runs away to a French embassy with the loot (: but then (: that week and more precisely between the first Tuesday and the next one when the revolt was supposed to be over the situation heavily degenerated thanks to saudi, qatari money, libyan, french and american intervention to counter the russian long time support to syria (: what a coincidence! (: it`s like when GMA said on afternoon he will die fighting but then early the very next morning the magnificent coward fled.

Sho khass la7oud? I like how you stay on topic, now who is being irrelevant, btw nasrocrap said nothing is going on as late as last spring ya zakzak...yalla roo7 nem...bas lek, so much for this being a wahhabi/salafi revolution as you like to say, this dude is christian...

what an idiotic answer.. ma according to you it was an american/Zionist/gulf conspiracy from the beginning .. so how did you not envision them interfering? hahaha what a loser.

Aoun can be outrageous sometimes. I think he needs to focus his effort on internal issues concerning only lebanon, and stop discussing the Syrian crisis.
Hariri, on the other hand, still seems a bit confused about the whole geopolitical situation currently. He does eat a lot of bacon though.

"2 years ago, nothing was going on in syria" LOL you ve watched otv too much hahaha... funny!

You are so stubbornly stupid that your imagination creates for you inexistent facts to suit your wishes. You need to take a rest!
Think about Deir Essalib which is the place where your master loved to stay.

Ha ha Manar is a know liar. Everyone knows that he would be dead if he was sacked. Bashar is a killer.

grow a bit, what kind of comment is this?

He's got a silly name. First time I hear a Christian named Jihad.

i guess M8 will call him a dangerous saudi wahhabi terrorist now....