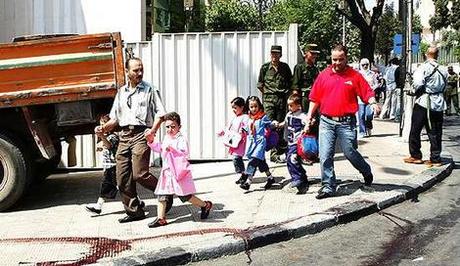 A rebel mortar attack on a school in a camp for displaced people near Damascus on Tuesday killed nine students and their teacher, Syrian state television reported, branding it a "horrific crime."

The broadcaster also reported 20 people were injured in the attack, but it was not immediately possible to verify their identities.

The mortar smashed into Bteiha school in Wafideen camp about 20 kilometers (15 miles) northeast of Damascus, the report said. Wafideen is home to some 25,000 people displaced from the Golan Heights by the Israeli occupation since 1967.

"In a horrific crime, nine students were killed along with one of their teachers," the television said.

The broadcaster initially reported a death toll of nine, but later updated it to 10.

"They were killed by a mortar launched by terrorists," said the broadcaster, using the Syrian regime's term for rebels fighting President Bashar Assad's forces in the country's raging civil war.

"Some 20 people were injured," it added.

Battles east of Damascus have grown especially bloody in past days as troops try to push back rebels in the Eastern Ghouta region as they inch closer towards the capital.

On Tuesday alone, a total of 16 people were killed in violence in the province of Damascus, said the Syrian Observatory for Human Rights, which also reported the killings in the Wafideen camp.

The Britain-based watchdog said raging battles were being fought on Tuesday at a checkpoint near the strategic road linking Damascus to the international airport.

The army, meanwhile, shelled several towns and villages on the outskirts of Damascus, both southwest and east of the capital, it said.