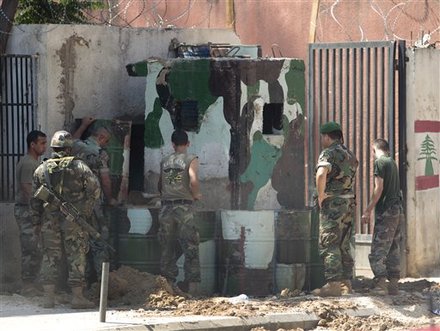 Two men were killed on Tuesday by sniper gunshots during clashes between Jabal Mohsen and Bab al-Tabbaneh regions in the northern city of Tripoli.

“The bullets that killed Mohammed Ibrahim, 65, were shot from al-Qobbah region,” a military source told Agence France Press, adding that the army is now firing back at the sources of the gunshots.

Twelve others were also injured in these clashes -- two in Jabal Mohsen and 10 in Bab al-Tabbaneh -- , while shops and businesses in the area closed down especially in Syria street that separates between both feuding regions.

Meanwhile, the army announced that it will be deploying more forces in Tripoli to prevent any further development of the fighting.

Tension in the northern city rose following the death of several Lebanese Islamists in the neighboring country in an ambush carried out by the Syrian regime in Tall Kalakh.

Media outlets reporting the news had conflicting information about the number of people who died and those who survived the attack.

While the Syrian Observatory for Human Rights reported that a group of 30 rebels "were caught in an ambush by government troops in the area of Tall Sarin near the town of Tal Kalakh”, Voice of Lebanon radio (100.5) said the ambush left 20 Lebanese men dead, adding that they hail from Akkar's Fnaideq and Tripoli's Bab al-Tabbaneh and al-Mankoubine neighborhoods.

What's the common ground? Both of them support either side of what's going on in Syria. Common solution? Deport both from either side to Syria if they cause more trouble....oh yeah and they don't deserve a single piece of any compensation...ridiculous. This is LEBANON, not a subdivision of Syria nor Iran, both sides take your stupid fighting out of Lebanon and leave us alone.

Tripoli people are nawar PERIOD. Perhaps if they fix the illiteracy problem that exists in tripoli, then they will stop doing this. There is nothing like a ignorant person who thinks he knows everything and unfortunatly, many people in tripoli and akkar are super stupid yet think they are super smart.

Racist? So you agree with what your tribesmen are doing in tripoli?

seems you are a big stupid racist... tripoli has many christians living there, akkar is a mix between christians and muslims, chias and sunnis... seems you know nothing so you d better shut up instead of ridiculizing yourself....

Wow roy, but your comment shows how smart you are, or is that super smart.

i second that roy.when I visited 5years ago, I found the people in akkar are so backward, I got sick everytime I left my village. in tripoli you cannot go and get a drink in a restaurant, yet those so called shoukiah are sitting home getting drunk and stoned and sending young boys to do their dirty works.shame on you

Akkar has so many hypocrites, its disgustung.

seems you don t know tripoli ignorant..."in tripoli you cannot go and get a drink in a restaurant"
all you say can also be applied to the south ... see how easy it is to spit stupidities? LOL!!!!

Keep your negative opinion for yourself Roy ...if two town are fighting from too many years ..doesn't mean that tripoli people like this ..look to your town first...

Why should i? This is lebanon, not saudi arabia or iran, i can say whatever i want.

I used to think that being Lebanese is important no matter whether you are sunni,christian, alwai,druzi and anything else that makes up the lebanese community . I was so wrong.. I only wish there was place were all those who have hatred in their hearts could go to this place and have it out once and for all and leave the rest of the people to continue to raise their families in peace without WAR.

Having seen war with my own eyes and viewing what is happening in Jabal Mohsen and Bab AL tabbaneh breaks my heart that lebanese women and children on both sides suffer because of WHO supports WHO .

you mean how is achrafeye after your thugs blew up a car and killed the shaheed wessam el 7assan. Terrorists.

the jabal mohsen pb was imported by M8 great leader hafez... he was the one to install an alawite community there to create division and control the city... so bring them back to syria and the case is solved :)