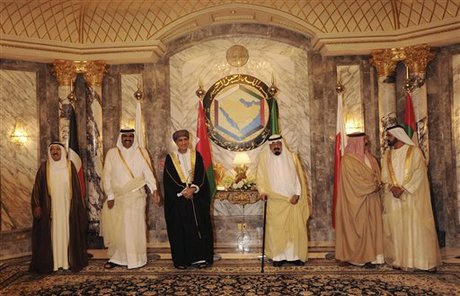 The six Gulf monarchies Tuesday responded to Arab uprisings by agreeing to expand their regional grouping to include pro-Western Jordan and Morocco and urged a quick political deal in Yemen.

"Leaders of the GCC welcomed the request of the Hashemite Kingdom of Jordan to join the council and instructed the foreign ministers to enter into negotiations to complete the procedures," Zayani told reporters.

He said the same procedure would be followed with Morocco.

His remarks came after a summit in Riyadh of the GCC, which groups Bahrain, Kuwait, Oman, Qatar, Saudi Arabia and United Arab Emirates, discussed relations with Iran, the unrest in Yemen -- the Arabian Peninsula's only republican state -- and the tensions sweeping the region.

The heads of state demanded that all sides in Yemen, which has limited observer status in the GCC, sign a transition plan brokered by the bloc.

"The council urged all parties in Yemen to sign the agreement which is the best way out of the crisis and spare the country further political division and deterioration of security," the GCC leaders said in a joint statement.

It said their transition plan for Yemen was a "comprehensive agreement that would preserve Yemen's security, stability and unity."

GCC heads of state discussed the bloc's mediation efforts which stalled this month in the face of veteran President Ali Abdullah Saleh's refusal to sign up to proposals which would require him to stand down.

He has been insisting that any transfer of power should be in line with the constitution which would allow him to serve out his term until 2013.

The GCC plan proposes the formation of a government of national unity, Saleh transferring power to his vice president and resigning after 30 days, a day after parliament passes a law granting him and his aides immunity.

GCC Secretary General Abdullatif al-Zayani travelled to Sanaa last week to invite members of the government and the opposition to sign the transition plan in Riyadh and to obtain the president's signature but he returned empty-handed.

Relations between Iran and its Gulf Arab neighbors have deteriorated sharply, with the bloc accusing Tehran of seeking to destabilize Arab regimes by stoking the unrest that has rocked the region.

Shiite-dominated Iran strongly criticized Saudi Arabia's mid-March military intervention in Sunni-ruled Bahrain which was aimed at helping crack down on a Shiite-led uprising.

Iran says it gives "moral support" to Bahrainis but is not involved in the protests. Bahrain and Kuwait have expelled Iranian diplomats, accusing them of espionage.