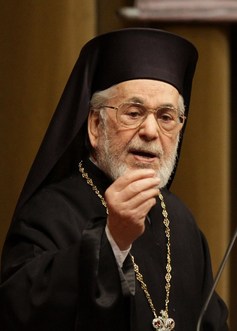 Patriarch Ignatius IV Hazim of Antioch and all the East passed away on Wednesday after suffering from a stroke and the day of his funeral has been announced a national mourning day, several media sources announced.

While the National News Agency said that the funeral will be held on Sunday at 12:00 p.m. at the Saint Nicholas Church in Ashrafiyeh, OTV reported that his coffin will be taken to the Mariamite Cathedral of Damascus also on Sunday.

Hazim was admitted to the Saint George hospital Tuesday morning after suffering a stroke that affected “his movement ability and consciousness”.

Born in 1921 in Mhardeh in Syria's Hama province, Hazim graduated in philosophy from the American University of Beirut in 1945, and went on to study liturgy in France in 1949.

He was one of the founders of the Orthodox Youth Movement in 1942.

Upon his return to Lebanon, he founded the University of Balamand in northern Lebanon.

He was consecrated as a bishop in 1962, and was elected as the Metropolitan of the Latakia province in Syria in 1970.

In March 2012, a year on from the outbreak of a popular revolt against Assad, Hazim was quoted by pro-regime Syrian daily al-Watan as warning against any foreign intervention in Syria, saying it would be bad for "both Christians and Muslims."

The Syrian National Council, one of the country's main opposition coalitions, issued a statement on Wednesday, offering its condolences over the death of Patriarch Hazim.

"He played an exceptional role in national and public life, in Syria and in all countries of the East," said the SNC.

"All Syrians boast that this Church has always been one of the key supporters of public action in Syria... making efforts to consolidate values of freedom, sovereignty and the national unity of the Syrian people," SNC chief George Sabra, himself a Christian, said in the statement.

Hazim died "at a time when the country is steeped in terrible suffering because of the regime's criminal practices, acts of destruction... and the death of tens of thousands" of Syrians, the SNC added.

The Greek Orthodox Patriarchate of Antioch and All the East is one of 14 autocephalous churches under the Orthodox communion. It counts around a million members, the majority of them Christians in Syria.

The country's 1.8-million-strong Christian community has stayed on the sidelines of the nearly 21-month conflict against the regime of President Bashar Assad.

Pretty sure Muslims arent allowed to say that about christians, jews and non-muslims as your quran says .

Before we swiftly replace our beloved living Saint Ignatius IV may we reflect, take a moment to come together to pray for his soul. He was our leader for over thirty years. He was our father in Christ and may our entire beloved Lebanon and Syria mourn his passing as people. Not as Christians, Muslims, Druze, but as people. As members of society

May his dear soul rest in peace.

Yes phillipo, thats the only good thing you have written on this site. Patriarch Hazim would never have approved of the filth and propaganda you otherwise post on here. So i advice you to learn from this great man and stop your festival of posting lies.

Why is it that some people can't even respect the leader of another religion when he passes away. Are they so narrow minded.

phillipo, you mean our leader, not your! Dont try to teach us lessons.

May he rest in peace. He was a good man who looked out for our interest in particular (Greek Orthodox) and the Christians as whole.

You are right lebanona. This man preached co-existance between the various faiths and inter-faith groups. Few men will be able to fill his shoes. And I hope he will be a lesson to us all that peace and love are what is needed in todays "different" world. Allah yir7amo. And I am sure he is in a better place now.

I fully agree with you. May God bless his soul and give us more such spiritual guides who rise above a particular sect or religion. He has been a shining example of how one puts oneself above greed and political gains.

Shenouda was antisemite, was this guy also one?

We agree again FT. It's rare, but yes, avi you re an idiot.

May He Rest in Peace.

May, it please the Almighty of His gracious mercy to receive His servant Patriarch Ignatius Hazim in His Heavenly Kingdom and make him inherit eternal life. At times like this we ponder how fragile and evanescent our life is, and hope that our cherished memories bring us comfort and make our departed ones seem to be still very close to us. Indeed, words can neither ease the sorrow that is in the hearts of the nation over the his death nor in the hearts of his family. He will always be remembered for his full dedication in serving the Lord and for his great achievements for his church in particular and for the nation in general
We brought nothing to this world, and it is certain we can carry nothing out (1 Tim. 6.7).
The Lord gave, and the Lord hath taken away; blessed be the name of the Lord (Job 1.21).
May God, let the lights of His Power perpetually shine upon the soul of His Servant Ignatius and work in him the good purpose of His perfect Will.
Anis

I see Lebanona is at it again - the moment someone disagrees with his/her way of thought what other people write is "filth and propaganda" and "festival of posting lies".
I may also feel the same way about what you write about matters not about other people, but in a democracy, and believe it or not Lebanon is a democracy, I support you right to express your beliefs.

Nice try phillipo, but its none of your business to come to a lebanese site posting your filth that you have done on numerous occations. Take your festival elsewhere and stop polluting every article. Dont try to lump yourself together with others, your the only one i have accused of having a festival of propaganda and lie posting because thats what you do whereas we lebanese surely often disagree on this site and have healthy debates but your only here for a foreign agenda. So stop polluting every article with your ill intentions.

As far as I'm concerned Phillipo's input is more than welcome here.

Kiserwan. He is a spirtual leader. Not a military one. He did what he could when he could. And did not discriminate against anybody and taught the message of Jesus like few people could. He would not be this great a man if he told a SINGLE person to pick up arms.

This is one of the few articles that we should put political bickering aside and just end it with Allah yir7amo.

May his memory be eternal. A great man... May we look to his example and be like him in building up our societies

Rest in Peace your eminence.