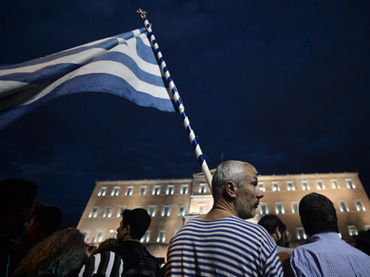 Greece is seen as the most corrupt country in the EU, Transparency International said Wednesday, adding that crisis-hit nations are being held back by an inability to deal with graft.

Perceived corruption in the country appeared to have worsened despite efforts to tackle graft. In last year's index, the debt-ravaged country was ranked 80th on a scale of least corrupt to most corrupt.

The director of Transparency International (TI) in Germany, Edda Mueller, told a news conference that the fight against corruption was intimately linked to the economic health of a country.

"The countries that are hardest-hit by the financial crisis have performed below expectations despite the reform efforts of recent months," Mueller said.

Corruption levels in a country are "closely linked to the economic stability of a country," she added.

"Therefore battling corruption is not just a moral necessity but it has a direct impact on the economic and political strength of a country," she added.

Top of the class this year were Denmark, Finland and New Zealand, each with a score of 90 due to a "strong access to information systems and rules governing the behavior of those in public positions."

In these three countries, "the lack of accountable leadership and effective public institutions underscore the need to take a much stronger stance against corruption," TI stressed.

Cobus de Swardt, a TI spokesman, told Agence France Presse that Greece's result was "not positive at all" and should act as an "additional wake-up call" to the authorities in Athens.

"Fighting corruption ... is very much at the heart of getting Greece out of the crisis," he said.

Overall, the NGO urged greater efforts globally against corruption, noting that two-thirds of the countries listed scored below 50.

"After a year of focus on corruption, we expect governments to take a tougher stance against the abuse of power," TI chairwoman Huguette Labelle said in a statement.

The results of the survey show that "societies continue to pay the high cost of corruption," Labelle added.

Among other major nations, the United States came in 19th, just behind Japan and Britain, which were ranked equal 17th.

Germany was 13th with 79 points, ahead of fellow European powerhouse France, which was 22nd with 71 points.