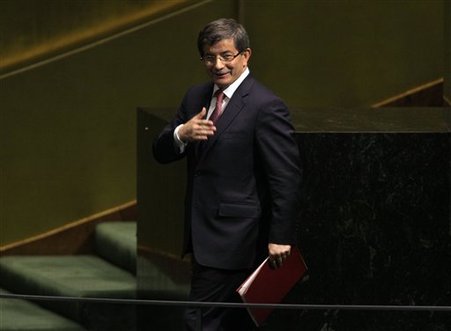 knows the "exact location" of hundreds of ground missiles belonging to the regime of Syrian President Bashar Assad.

"Assad has about 700 missiles... Now we know the exact location of all of them, how they are stored and who holds them," Davutoglu was quoted as saying by the Sabah newspaper.

The comments emerged the day after NATO ministers approved Turkey's request for deployment of Patriot missiles along its volatile border with Syria, a move that has angered Damascus and its allies.

Davutoglu said the international community feared possible attacks from Damascus against countries such as Turkey which were pushing for the toppling of the regime, if it felt the end was near.

"We say to anyone who would want to attack Turkey -- don't even think about it," NATO head Anders Fogh Rasmussen said in announcing the alliance's decision on the Patriots, a U.S.-made ground to air system.

The number of missile batteries and their precise location have yet to be decided and will be determined after a site survey in Turkey and consultations within NATO.

Turkey requested the Patriots out of concern for "possible action by uncontrolled groups in Syria," Davutoglu said without elaborating.

Turkey has said the missiles would be for "purely defensive purposes" after several cross-border shelling attacks from Syria, where the 21-month old conflict killed more than 41,000 people according to rights groups.