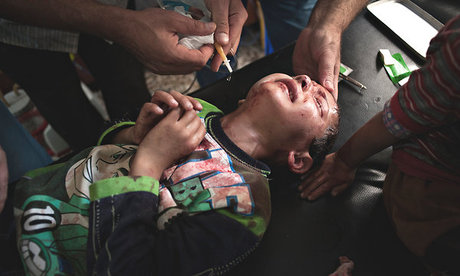 U.N. Secretary General Ban Ki-moon on Wednesday called on all warring parties in Syria to stop fighting immediately, saying there is no military solution to the conflict.

"This is totally an unacceptable situation. We cannot let the situation continue this way," Ban said.

Ban also said that all problems should be resolved "through a political process."

There is no politican process ya Ban. Bashar wants to stay until 2014. Then he wants elections where he will be the only living candidate. He will not go to a neutral location for any talks. Three different negotiators/observers have tried.

The only solution is war in this case because an animal only understands one thing. Kill or be killed.