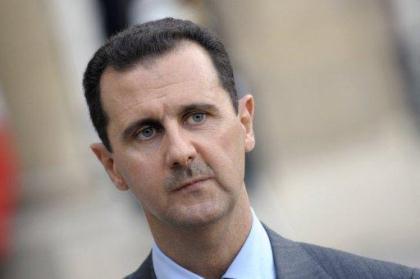 The United States said Wednesday it was aware of informal offers of asylum to Syrian President Bashar Assad by countries in the Middle East and elsewhere.

State Department spokesman Mark Toner gave no details, referring reporters to others governments after being asked about speculation that the Syrian president was weighing asylum offers from Latin America.

"We do understand that some countries, both in the region and elsewhere, have offered to host Assad and his family should he choose to leave Syria," Toner said.

The asylum speculation stems from a recent trip to Cuba by Syria's deputy foreign minister, Fayssal Mekdad, who delivered a message from Assad to Cuban President Raul Castro, according to the official Cuban Prensa Latina news agency.

The Syrian official also was reported to have traveled to Venezuela, Nicaragua and Ecuador, whose leftist governments have close relations with Havana.

But the latest rumors come amid intensifying fighting in the suburbs of Damascus, and U.S. warnings to Syria not to use chemical weapons against its own people.

I hope he decides to step down before it is too late and it becomes the far west. He can negotiate to put a council in place with people from all sides that will overlook new parliament elections, a new constitution and the election of a president later on.
And of course we (leb) would benefit that the situation will not overflow to our country (more so than now).

@lebfrcan
This is off the subject but I am curious why the blue?
Also, the blue as it stands is kind of overwhelming, mau I suggest halving the width and giving more space to the cedar and maple leaf?

Leb fr can. So it's for France.
Thanks for the suggestion, Yeah i am not the best in photoshopping.

The butcher cannot and will not get away in one piece. At the rate of 100 death/day... No way

Benzona, yes he is a butcher, but the syrians will not benefit from more stubberness from him because many more dead and destruction will follow.
I want him dead as much as you, but better he leaves with a resemblance of a government or council in place than have an anarchy where it will be MUCH more difficult to rule this country for a decade to come.

waw! mowaten you know what is best for syrians don t you? what an expert you are and very modest it seems too! LOL

he will be hanged! anything less will be a tragedy in itself.

No. Not hanged. What is it with people and the death penalty? Other than all other implications, here's one argument: Death - a moment's lasting of one's life, or loss of liberty - the whole rest of one's life!

Death turns some people into martyrs. Life imprisonment on the other hand...

Here we go.....Bashar looking to run away and hide from the mass murdering he did. No country can hold him. They will be sanctioned if they don't give him up. He is a criminal!!!

How many days left until he runs away like Aoun. He should get some pajmas for the exit.

Run away little giraffe coward. Leave the Hezz on the battlefield like Aoun left his soldiers.

i already called dibs on the wife... so everybody divert your attention to other family members...