Report: Lebanese Men Arrested in Tall Kalakh to Be Tried in Damascus 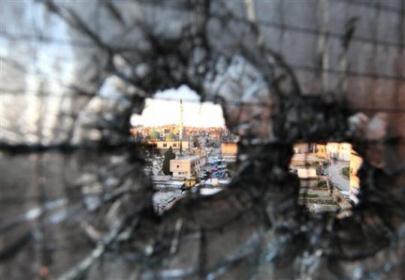 Several Lebanese men arrested in a deadly ambush in the Syrian town of Tall Kalakh will not be handed over to Lebanese authorities and will be tried in Damascus instead, An Nahar daily reported on Thursday.

The newspaper said that around three of the armed men, who mostly hail from North Lebanon, were arrested in the ambush made by Syrian regime forces last week while 14 of them were killed as they infiltrated Tall Kalakh to fight alongside the Free Syrian Army.

Syrian Ambassador Ali Abdul Karim Ali informed Foreign Minister Adnan Mansour on Wednesday that Damascus would hand over the bodies of the slain Salafists in three rounds and within one week.

According to An Nahar, Lebanese authorities were informed about the names of the slain men who will be handed over to the General Security Department.

But the three men, who were seized by Syrian soldiers, will be tried in Damascus, the daily said.

Media reports had said that several other fighters had escaped the ambush and joined the rebel FSA that is fighting the regime of President Bashar Assad.

The Tall Kalakh ambush led to fierce clashes between supporters and opponents of Assad in the northern Lebanese city of Tripoli.

The gunbattles between armed men from the mostly Sunni Bab al-Tabbaneh neighborhood and Jabal Mohsen, whose residents are Alawites from Assad's sect, have left scores of casualties.

An Nahar said that the Lebanese army on Wednesday arrested five gunmen and seized arms and ammunition during operations that left two soldiers wounded.

Judge him according to the dictatorial law, We'll Judge the Syrian General Mamlouk as well as the Syrian Colonel (Samaha case) with our laws.

I'm waiting for the day when Assad will be judged by Lebanon for his remote-controlled crimes. Or maybe his fellow Syrians will treat him like Gaddafi was treated...who knows.

...will be tried in Damascus..He means tortured and killed...how about trying the syrian army for shamefully killing, and bombing Lebanese Christians...I am so glad that the curse fell back on its sorcerer ...just like the arab springs that soon becomes the world's biggest nightmare!

I am sure they are being tortured as we speak...Assad the dog will be treated worse than Gaddafi...

They know what they got into, so they have to accept the consequences. Lebanese should stay out, no matter what side they are on. This includes both people fighting for and against the regime.

As for a 'trial' in Syria, that is as laughable as the 'referendum' that Syria held in February where 90% of the people voted for the approval. How many countries does anyone get anything more than 70% approval? Even in Lebanon, things are split nearly 50/50 and I remember Saddam getting 99% of the vote. What is the difference between Saddam and this regime?